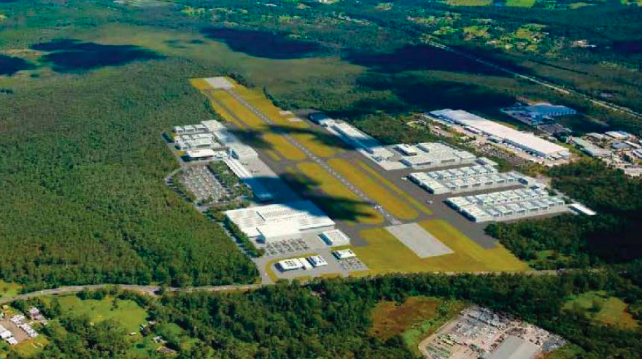 Artist’s impression of an expanded Warnervale Airport by 2037

The Central Coast Council has resolved to step back from the former Wyong Council’s masterplan to build a Regional Airport at Warnervale but pro- and anti-airport campaigns continue and Council’s plans to reallocate airport money to create jobs are moving slowly.

In the eight-month life of the first elected Central Coast Council, it has considered items related to the Warnervale Airport 10 times, including two rescission motions. The plans of the former Wyong Council to develop a Regional Airport, at multiple sites, continue to be a major legacy issue for the Central Coast Council. In a recent interview with the Wyong Regional Chronicle, Central Coast Mayor, Jane Smith, clarified her position on the airport. Mayor Smith said protection of the Porters Creek Wetland to the south of the existing Airport was her key priority.

“We identified that the money that was allocated to the Airport expansion would be reallocated to employment-generating activities across the whole Coast and Council is looking at the best allocation of funds,” Mayor Smith said. “I think the majority of Councillors recognise we want that funding allocated to employment generating activities and we want that delivered sooner than it would have ever been achieved through the [Airport] master plan,” she said. As for the existing Airport, Mayor Smith said: “My position has always been I don’t have a problem with the current operation of the Airport. “I don’t support the bigger Airport plans and I think there are a few mixed messages coming from the aerodrome and Council needs to get an understanding of their intentions,” she said.

The Central Coast Aero Club’s authority to operate from the Warnervale aerodrome runs out in 2021 and those who wish to see the Airport land developed as an industrial park believe they should find another location from that date. Mayor Smith confirmed she had met with the head of the Aero Club, Mr Andrew Smith, and other board members. “I had a meeting with Andrew Smith and a couple of members of the board because none of the current resolutions affects the current operations on the Aero Club,” Mayor Smith said. “I was pleased to meet with Andrew Smith and discuss their lease and I suggested Andrew write to me formally as the Mayor so he has written to me and that is being considered,” she said.

“My first priority is to secure protection of Porters Creek Wetland and once secured I will divert my attention to the future licence or lease for the Aero Club; I do understand the board, they want a bit of certainty,” she said. Mayor Smith said her support for the Central Coast Aero Club did not have anything to do with Liberal Party life member and former Gosford Mayor and MP, Mr Malcolm Brookes, who is understood to have supported her campaign to run for Council and Mayor. “There was no pressure from Malcolm, I consider Malcolm as a friend but he and I disagree on a number of things,” she said. Mayor Smith said Council was “not stepping away from the Wyong Employment Zone (WEZ),” but it was not only the Airport land and other WEZ land that was being considered for job creation.

The WEZ was earmarked as a state significant site to be developed for job creation but has not been progressed for 20 years. “Timing is the key consideration; … the intention is that it is done properly to deliver that capacity for employment generating land,” she said, pointing to the WEZ land owned by Council but also to land zoned industrial but privately owned in other locations. “I don’t know why some Councillors want to continue to advocate for that Airport masterplan, I think it is misguided and doesn’t deliver the outcomes that are the best for the community,” she said.