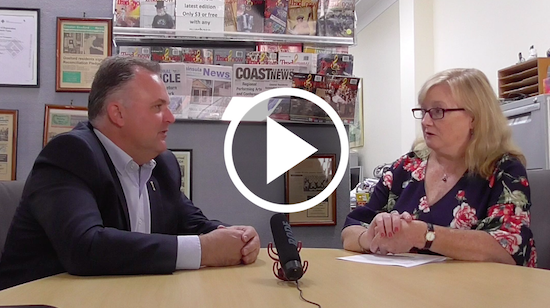 The Member for Terrigal, Mr Adam Crouch, has announced a proposal to build a boardwalk between Terrigal rock pool and The Haven.

In the latest Central Coast Newspapers Video News, Mr Crouch told journalist Jackie Pearson that his online petition to garner public support for the project had received over 1000 signatures in one week.

“The boardwalk at Terrigal has been something that has been talked about for 20 years but never delivered,” Mr Crouch said.

He said the petition would help him to convince the premier and deputy premier that the project was worth a $3 million contribution.

“As a local member I can walk in with confidence and say to the Deputy Premier and the Premier this is a great project and the majority of the community are supportive of it,” he said.

“The community response has been incredible, I knew it was going to be positive but within a week we have had more than 1000 people hop online and say this is great let’s do it.

Mr Crouch said his announcement of the project was not an example of “pork barrelling” by a sitting member in an election year.

“The reality is the grant funding for regional projects was made available recently and I looked at it and thought it was a great project that would tick all the funding requirements so it has nothing to do with election timing if the money had become available a year earlier I would be having the same discussion,” Mr Crouch said.

He said Council had always wanted to build the boardwalk but had never had the funding and now they were hoping to get the project started this year, as soon as the funding is announced.

Mr Crouch also discussed the upgrade to the Terrigal Rock Pool, an extension to the 5 Lands Walk at Winney Bay, asbestos on Wamberal and Terrigal beaches, and dredging of the Channel at the entrance to Brisbane Water.