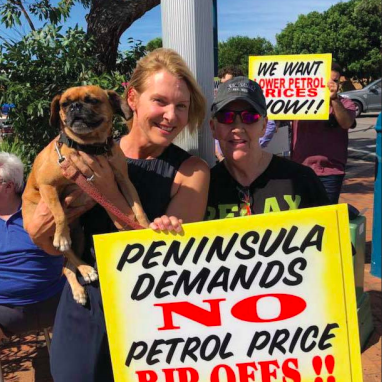 Member for Robertson Ms Lucy Wicks has told Federal Parliament she looked forward to a speedy response from the ACCC regarding her concerns about petrol prices, particularly on the Peninsula.

Ms Wicks said the ongoing challenge of high petrol prices in her electorate was especially concerning for its many commuters. “They often have daily reminders when they’re driving along our local roads about the price differences in nearby markets,” Ms Wicks told the House of Representatives. “In 2015 we launched the Robertson Petrol Price Petition because we heard the concerns of so many local residents,” she said. “We’ve received around 1000 responses, including comments such as, ‘It’s out of control’, with claims that petrol is around 30 cents a litre more expensive in one suburb compared to another.

“We’ve heard from local businesses owners and we’ve heard from people with chronic illness who’ve got no option but to purchase fuel at high prices. “Over the last three years, I understand the Government has taken practical steps to give the ACCC the powers to investigate and, locally, we’ve kept fighting against high petrol prices on the Central Coast and fighting to see a spotlight, particularly, on petrol prices on the Peninsula. “Last week, I wrote again to the ACCC to request an update on this issue. I look forward to a reply.” The petition can be signed online at surveymonkey.com/r/robertson_petrol_price_petition

Time to get your hearing checked