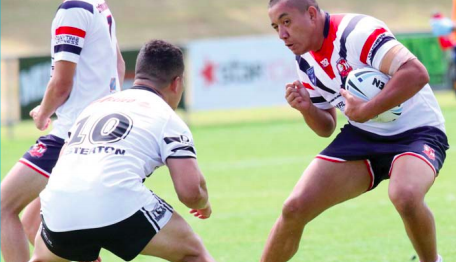 A brace of rapid-fire tries scored just before halftime paved the way for an impressive Central Coast Roosters’ victory over the Western Suburbs Magpies, in round two actions of the SG Ball Cup at Kanwal.

An even opening had seen the scores locked at four a piece approaching the half-hour mark, before fullback, Lewis Sheens, ran off his five eighth, Harry Edwards, to push the Roosters out to a lead. Two minutes after Sheens’ success, and in the shadows of halftime, hooker, Fletcher Berry, split the Magpies defence out of dummy half. The Kincumber rake galloped up centre field before linking with Edwards in a 60 metre movement that ensured the home side would take a 16-4 advantage into the break. Second half tries to Erina centre, Jack Frasca, and Peninsula prop forward, Brae Verheyen, kept the tenacious Magpies at bay, and the Mark O’Meley coached Central Coast were able to complete a well deserved 24-10 win. The victory has pushed the Roosters up the premiership ladder and they are now handily placed heading into a round three bye, before a much anticipated clash with Manly at Brookvale on March 3.

The Matthews Cup, Under 16 game saw the Coast stage a remarkable second half fightback before falling agonizingly short of victory. Trailing 18-0 at oranges, it all looked lost for the young Roosters. However, three sparkling tries in 18 minutes after the break reduced the deficit to just four. The Magpies suddenly had the staggers and all the momentum was with the home team as reinvigorated forwards; Jerry Ratabua, Jack Bishop, Matthew Russell, and team captain, Zac Montgomery, led the charge. Sadly, for the pro-Roosters crowd, a Wests try, scored totally against the run of play, sealed the result with four minutes remaining on the clock. The Coast hit back with a late four-pointer to Wyong’s, Matthew Russell; closing out the scoring at 22-18 in favour of the Magpies on a day in which a sluggish opening ultimately led to the Roosters’ downfall.