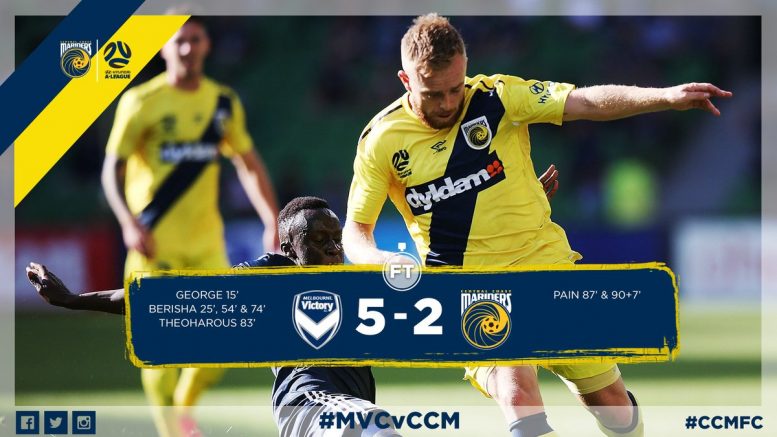 The Central Coast Mariners lost in their clash with the Melbourne Victory on March 18. Connor Pain bagged a brace against his former club, but it was a case of too little, too late, against a clinical Melbourne Victory, headlined by hat-trick-hero, Besart Berisha.

The Yellow and Navy started both halves in the driver’s seat and finished the game strongly, with Pain’s two goals, but Victory made the most of their opportunities across the 90 minutes to move into the third spot. The opening stages went all in favour of the Mariners, who should have been a goal up in the third minute of play. It started with a pinpoint through ball from Andrew Hoole to Pain, to earn a corner. The corner fell to the feet of Antony Golec, who fired at goal, beat a diving goalkeeper, Lawrence Thomas, but it was somehow cleared off the line by Rhys Williams to keep it 0-0. But in the 15th minute, Berisha would chip in to hurt the Mariners, when he assisted Leroy George for the opening goal. George made no mistake with his one-on-one opportunity, to give Melbourne Victory a 1-0 lead. Ten minutes later, the Albanian and Dutchman linked up again to double the Victory’s lead, with George assisting Berisha in the 25th minute. It was a horror end to the fi rst half, when Golec awkwardly collided with Victory’s goalkeeper, Lawrence Thomas. Golec was treated on the spot by paramedics and taken straight from the fi eld to play no further part in the match. The Mariners came out fl ying in the second half, keeping the ball and creating all the chances. The Yellow and Navy looked certain to score in the 51st minute, when a ball from Pain found the head of McGing. McGing’s header across goal was straight at Powell, who looked certain to head home, but the effort was wide.

Despite a dominant start to the second half by the Mariners, Victory had their third goal in the 54th minute and Berisha had his brace. Twenty minutes, later the Albanian headed home for his hat-trick. In the fi nal 10 minutes of play, substitute, Christian Theoharous, found the back of the net and Victory’s fi fth goal of the night. Then in the 87th minute, Mariners’ substitute, Trent Buhagiar, created something from nothing down the right wing with his blistering speed. He found himself in behind the Victory back four, and Pain was on the back post to get on the scoresheet for the Mariners. In the seventh minute of stoppage time, Pain pulled the trigger on a sensational volley from distance to emphatically earn the fi rst brace of his Hyundai A-League career. Speaking after the game, Mariners’ head coach, Paul Okon, said: “We worked all week on transition moments and rest defence, because we know that Victory are the best when it comes to punishing you when you make mistakes.

“Their top four are clinical and that’s exactly how it went. “I don’t think Ben Kennedy made a save. “Victory had fi ve moments in front of goal and scored fi ve goals. “We had just as many, if not more. “We only managed to score two. “Victory deserved to win, but I think we deserved to score more goals than we did. “I’m happy for Connor that he scored two goals. “We never seem to get gifted goals, every one of them this season we’ve had to work ever so hard for. “Victory have a front four that don’t miss opportunities, that’s why they are one of the best clubs in the country,” he said. Okon said the Mariners approach would not change in the lead up to their match with Sydney FC. “We need to continue to work hard like we’ve done all season. “We approach the next game against Sydney no differently than we approached today’s game. “At times we were really good with the ball.

“We created opportunities to score, that hasn’t been any different in, I would say, 95 per cent of our games this season. “But, you have to have that quality to be able to convert those opportunities into goals which translates into winning games, more points, higher up the ladder. “We fi nish the game with a 19-year-old left centre back, a 20-yearold right centre back, a 19-year-old striker. “Danny De Silva has just turned 21. “I reckon I wouldn’t be far off saying that our average age would have been close to 21/22. “That’s where the club is at the moment, it gives those opportunities and we will continue to do that,” Okon said.

Mariners unlucky not to get three points against Melbourne Victory

Unlucky 13th loss for Mariners but not disgraced