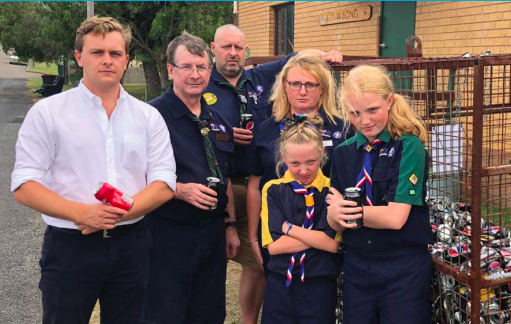 The money earned by the group will reduce the cost of participating in activities such as attending the Australian Scout Jamboree, which will be held in South Australia next year. Unfortunately, the storage cage where the Scout Group collects the empty cans and bottles was recently broken in to. Scouts Central Coast Lakes District Commissioner, Mr Brian Perrem, said a Scout Group Leader had caught a male in the cage taking the containers. “When he was caught, the man quickly left, however further cans were stolen from the cage over the following days. “The money we raise goes towards making Scouts more affordable and the theft may mean local families need to pay more,” Mr Perrem said. The Scout Group is aiming to raise $8,000 towards the cost of attending next year’s Jamboree. They estimate that around $300 worth of empty containers were stolen. The Scout Group does have insurance, however, the theft is not covered.

They have also since installed a security camera aimed at the cage. Mr Taylor Martin, MLC, met with some of the scouts and leaders following the theft. Mr Martin said Scouts do wonderful work in youth development and are treasured on this part of the Central Coast. “It is unfortunate that some members of our community think it is okay to steal containers that our local scouts have worked hard to collect,” he said. Mr Martin said the scheme encourages groups such as Scouts to collect donations of empty eligible containers for the charity or community group to then redeem them at an approved collection point. The public is able to donate their cans at the Scout Group clubhouse on Levitt St, Wyong. “Return and Earn is a win for the environment and an opportunity for Central Coast community groups to also benefit,” Mr Martin said. “Not only are Scouts helping to reduce litter on our streets and in our waterways, but they are raising funds while doing it.”