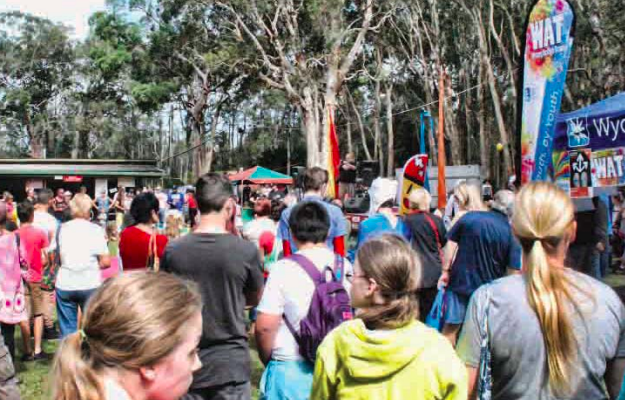 Crowds at a past GOATS festival on the Central Coast.

2018 marks the 20th anniversary of GOATS, an event that has made its mark as the Coast’s largest annual music event featuring young people from across the Central Coast.

Attracting more than 7,000 people every year, the festival is much more than a showcase for the region’s young talent, it is an intergenerational success story that has inspired musos and communities across the Central Coast. Going Off At The Swamp, or GOATS as it is more commonly known, is the brainchild of Central Coast Councillor, Ms Jillian Hogan, who 20 years ago identified that there were few opportunities for young people to celebrate their talents in a drug and alcohol-free event. Looking for positive ways to connect young people to their community, Clr Hogan organised the first ever GOATS Festival with two young bands performing on the back of a truck. That small event was so popular that she decided to make it an annual event, encouraging the involvement of young people in the planning phase as well as on the day.

Today, the festival takes more than six months of planning, with over 50 volunteers of all ages involved in the lead up to the day. Three stages host over 40 acts, with more than 200 performers, aged between 5 and 25. Mentoring is a strong component of the planning process and includes opportunities for young people to experience all aspects of organising a festival including coordination, stage management, public speaking, roaming entertainment, event management and sound production. Clr Hogan is nowadays affectionately known as Mother GOAT, and continues to lead and mentor in all aspects of the event, from inception to the festival day. Now spanning three generations, it is not unusual to see past performers bringing their own children back to the place where they once performed.

Bands and performers who are succeeding in the music industry, return to inspire those starting out and remember GOATS as an opportunity to perform. Rock and heavy metal bands can be seen jamming with younger folk artists, paying respect to all genres of music, and networking between musicians, which consistently leads to more performance opportunities and collaborative gigs. The event has always been free entry, and prides itself on being drug and alcohol free, so it is a rare opportunity for families and all ages to enjoy music, and at the same time, learn about their local community from the many community stalls, markets, rides, petting zoo, art, food, free activities and more.

An array of special guests will be joining the GOATS family this year in celebration of the anniversary. Mark Gable from The Choirboys will also feature at the official opening. Also performing will be: Central Coast local, Fletcher Pilon; Greg Gould, who performed at GOATS years ago and has since gone onto international acclaim; October Rage, a GOATS favourite for many years and just back from an international tour; and, Ella Roberts, another GOATS regular who is taking the Celtic music world by storm. Joining them will be 100 young people performing throughout the day on three separate stages in bands, duos and solo acts.

Drug and alcohol free event a credit to the community

Hogan serious about giving people a hand up