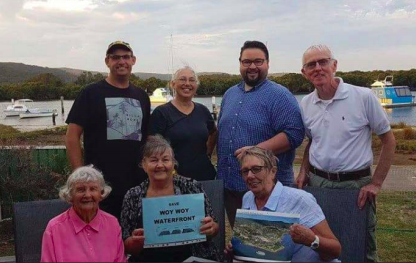 Cr Richard Mehrtens has said he was considering moving to have an independent assessment report done by an outside organisation on the proposal to redevelop the Woy Woy Sporties club.

“I committed to raising that prospect with my colleagues but at this point, it does not look like there is a great deal of support for using an external consultant to review the proposal. “There is a possibility and appetite to have an independent internal report by development and assessment staff that were not involved in the first report,” he said. The Labor Gosford West Ward Councillor said: “I met with members of the Save Woy Woy Waterfront group recently and they let me know what their situation was.

“It was good to get their point of view because they have been dealing with this for months,” he said. “I committed to asking questions of Council staff which included what the process would be for me to bring the proposed development to Council for discussion. “I am waiting to hear back on what options are available to me to bring it to the council directly.” The $30 million proposals for the Sporties site will be determined by the Joint Regional Planning Panel. The procedures for planning panels state that an elected Council can make its own submission to the Panel, in addition to the assessment report Council staff are required to prepare as part of the development application process.

The elected Council’s submission would need to be prepared by staff that were not involved in the assessment of the DA. The councillors who are currently members of the Panel, Cr Chris Burke and Cr Kyle MacGregor, would need to declare a conflict of interest and not participate in any discussions with their fellow councillors about the application. “I know the Panel met with staff and I was told it was a closed meeting and not appropriate for me to attend. “I was keen to hear what staff and Panel members were saying about the project. “My concerns are that it is going to be another one of those projects that will be a major shifter for the area, particularly for those people who use the park at the end of Brickwharf Rd, but rather than give it proper analysis it will be put aside for a quick and easy approval by the Panel.”

As for the proposed amalgamation of Sporties with the Ettalong Memorial Bowling Club, Cr Mehrtens said he did not support: “Any proposal that would leave a shell of a club there. “A club only in name is not in the spirit of what that project should be and what the State planning policy for seniors housing allows for. “It flies in the face of what should be considered acceptable. “My feeling is the land is zoned for recreation and that, unless the club is a substantial part of that development, it should not be allowed under the State planning policy. “The club should be able to continue to play a role in the community as a recreation venue. “My major concern is what is going to happen to this area if it becomes a residential development and retail complex. “We have so little valuable recreational land on the Peninsula if we lose it to residential, retail or commercial we cannot afford to give it away.

“It has now become more of a residential development than a recreational development and if we allow the inch by inch loss of community land we set a very bad precedent. “And that is on top of the four major tide events in last two months which makes that side of the Peninsula almost completely unusable especially with an underground carpark.”