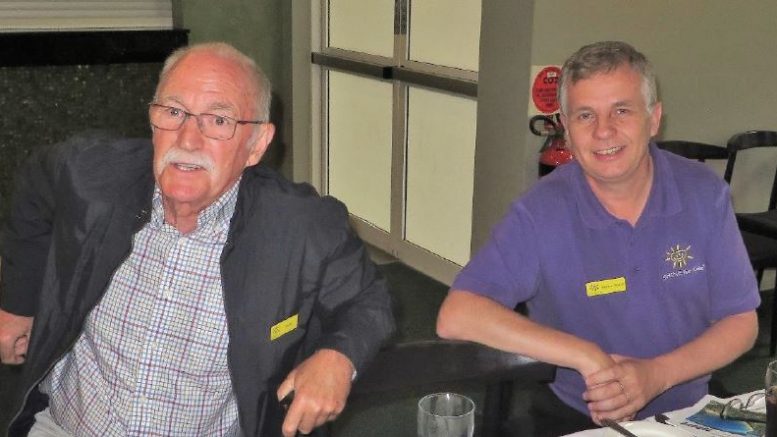 Umina Beach Rotary Club were visited by advocates an organisation supporting youth and families involved in the criminal justice system, Shine for Kids.
Mr Dennis van Someren and Mr Stephen Morrell spoke about what Shine for Kids did and who it supported.
“Shine for Kids is one of the only national charities in Australia that works solely to support the children and families of people involved in the criminal justice system,” Mr Someren explained.
“We work to lessen the effects of imprisonment on children and families.
“We believe in the power of early intervention to reduce the risk of intergenerational crime.
“The government spends $4 billion building new prisons and $1.5 billion each year to run them.
“There is a 70 per cent recidivist rate.
“The number of mothers going to jail has increased by 77 per cent.
“The politicians and bureaucrats are sweeping the problems of the children under the carpet,” Mr Someren told Rotary.
“Just $3 million each year goes towards Shine for Kids, forcing them to seek donations to keep going, just at the current level.
“Shine has 40 staff and 140 volunteers.
“These volunteers assist with transport and visitation programs, holiday activities, mentoring activities and education support.
“At least 40,000 people are in prison and at least 60,000 children have a parent in prison.” According to Mr Someren, 20 per cent of these will follow their parents.
“They are victims,” he said.
More than 5000 children participated in the Shine program in 2016.
Mr Morrell, a life coach for many years, joined the Department of Juvenile Justice and Shine for Kids over a year ago and has mentored hundreds of young people since.
“At the Baxter Detention Centre, there are 92 young offenders incarcerated.
“These young people have a 54 per cent chance of reoffending and returning.
“One young chap, I was mentoring, has been in 27 foster homes.
“Another saw his father commit suicide,” Mr Morrell said.
“Three months before release date, mentors start working with young offenders to make them aware of the alternatives to a life of crime and try to put a plan together for them on release.
“More volunteers are needed to work twice a month in the program.
“On release, a young person is given $170 and if no one is there to meet them, they are put on a train.
“They get to Sydney, go to where there are people they know and often buy drugs or offend again and return very quickly, to where they started.
“Interim houses are needed to bridge the gap between release from detention and a return to normal life,” he said.
There are only two such houses in NSW.
The Veterans Young Offenders Mentoring Program is a partnership between Shine for Kids, RSL NSW, Soldier On and Juvenile Justice NSW.
“Shine is looking for veterans to use their life and leadership skills to make a difference to the lives of young people, aged 10-21, involved in the juvenile justice system,” Mr Morrell said.