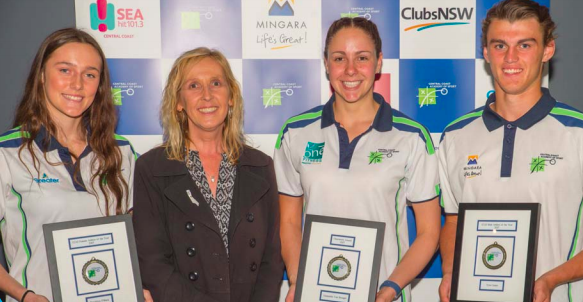 Tyler Gunn was crowned Male Athlete of the Year and, Brooklyn O’Mara, Female Athlete of the Year, at the Viatek Central Coast Academy of Sport Awards Night at Mingara Recreation Club on November 29.
The Chairman’s Award was presented to Cassandra Van Breugel, and Sandra English attained the Ray Sandell Dedication to Sporting Excellence Award.
Team Challenge Australia engaged the Academy Athletes in a series of outdoor challenges before the presentation of awards.
Following the presentation of awards, all attendees were invited to mingle and celebrate with the Academy which hosted a Christmas celebration.
Mr Ian Robilliard, Managing Director of the Academy, said: “The greatest highlight and the main reason that we are here, is to thank our scholarship athletes and their families for their efforts over the course of their respective sports programs.
“All our athletes continue to represent the Academy and the Central Coast region with distinction.
“I can also confirm that the Central Coast Academy of Sport is a major contributor for this region.
“Numbers from an independent report, provide evidence that last year we delivered $4.8 million dollars in value to the Social and Economic well-being of the region, our volunteer hours contribute conservatively $240,000 annually to our region, and we have helped build 15 jobs, not bad results for a vibrant organisation which has helped well over 3,500 scholarships since our inception in 2004.”
At 17, Male Athlete of the Year, Tyler Gunn, has had a challenging athletics career.
Gunn suffered a number of injuries earlier in his athletics career that restricted his earlier performances.
During 2017, his focus has been on improving his strength, fitness, flexibility and more importantly all technical aspects of his running.
The support received from family and coaches, particularly Mr Frank Overton, saw him progress to a very high level within his chosen discipline, the 400m sprint.
In 2017, Gunn won the NSW State under-20, 400m tittle, with a time of 47.77 seconds, was second in the Australian National under-20, 400m final, with a time of 47.48 seconds, and second in the NSW State Open men’s 400m final, with a time of 47.87 seconds.
He then finished his season off with a very credible eighth in the Open Men’s Australia National Championships 400m final.
Brooklyn O’Mara, female athlete of the year, is a member of a highly talented squad of netballers, undefeated in the 2017 ClubsNSW Academy Games.
This was a first for the Central Coast Netball program, and O’Mara was a key contributor of this success.
The Chairman’s Award is to recognise an athlete who upholds the principles of the organisation, and elements such as fair play, sportsmanship, consideration of fellow teammates, determination and enthusiasm.
Cassandra Van Bruegel was described as a most worthy winner of the Chairman’s award.
Her commitment and success in Swimming was deemed “quite remarkable”.
A finalist in the 50m, 100m and 200m at the 2017 Australian Championship, which ranks her 6th in Australia in breaststroke, is testament to her ability.
Cassandra is the current NSW State Champion in the 50m, 100m and 200m breaststroke, and she holds each NSW record in this troika of events.
She is also a gold medallist in the Australian University Games, where she won in the 100m, representing the University of Newcastle, where she is studying nursing.
Graeme Carroll, the Head Coach of the Swimming Program, said of Cassandra’s commitment to the program: “She is an amazing young lady, an excellent competitor and a young person who strives to do her absolute best.
“This award is very very deserving and I offer my heartfelt congratulations.”
The name Sandra English, winner of the 2017 Ray Sandell Dedication to Sporting Excellence, is a household one when it comes to surfing and surfing championships.
A winner of some 13 national championships and a representative at four world championships, Sandra English has devoted almost a lifetime to her chosen sport.
What’s remarkable is that she is as well versed as a surfing coach as she is as a highly successful competitor.
Her commitment to the CCAS surfing program has guaranteed its success, and her philosophy, when it comes to coaching, mirrors the values that the CCAS promotes.
In the category awards, Tyler Gunn was named Athletics Athlete of the Year and the Athletics Encouragement Award went to Katie Gunn.
The Basketball Athlete of the Year was presented to Jamal Shoaib and Basketball Encouragement Awards were received by Boston Pate and Hudson Bush.
Cycling Athlete of the Year was won by Liliya Tatarinoff and a Cycling Encouragement Award was presented to Tom Yallouris.
Hayden Dillion was crowned Future Stars Athlete of the Year and a Future Stars Encouragement Award was presented to Isabella Fitzgibbon.
Golf Athlete of the Year was Liam Gocher and a Golf Encouragement Award was presented to Riley Myers.
Netball Athlete of the Year was Brooklyn O’Mara and a Netball Encouragement Award was given to Charlotte Flynn.
Surfing Athlete of the Year was Joel Vaughan and the Surfing Encouragement Award was presented to Molly Picklum.
Swimming Athlete of the Year was Nathan Ward and the Swimming Encouragement Awards were won by Fergus Henderson and Jessica Pollard.
Cody Frost was named Touch Football Athlete of the Year and the Touch Football Encouragement Awards were received by Kaya Ardita and Brooke Goodhand.
Tenpin Bowling Athlete of the Year was Damon Lloyd and a Tenpin Bowling Encouragement Award was presented to Cameron Johnson