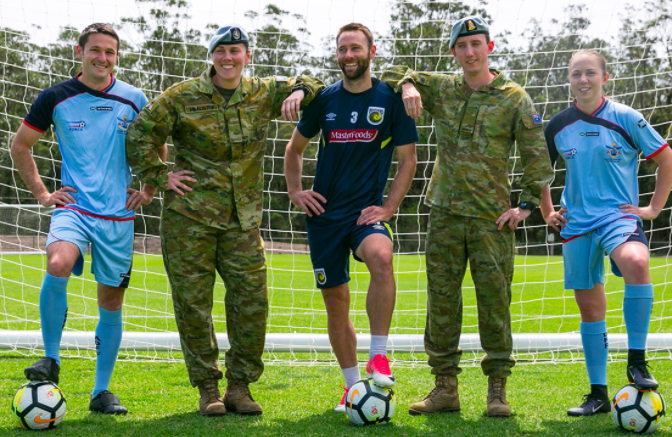 This Friday the Central Coast Mariners will open the gates to all current and ex Australian Defence Force Service Men & Women as a part of the Hyundai A-League’s Remembrance Round. The Mariners face Sydney FC & kick-off is 7:50pm.

Not only will all current and ex Australian Defence Force Service Men & Women gain free entry, they will also be offered 15% off all Mariners merchandise on game day.

For service men & women to access complimentary tickets, they must display their service card to Mariners representatives in the Membership Marquee on Dane Drive.

All 10 Hyundai A-League clubs are uniting for Remembrance Round from the 10-12th of November. Driven by the partnership between the Australian Defence Force (ADF) and Football Federation Australia.

We caught up with Josh Rose who spoke about the importance of Remembrance Round and why it’s an initiative that’s so close to his heart.

“My grandad on my father’s side served in the New Guinea War back in 1944,” Rose said. “To play in Remembrance Round certainly adds an extra element to the match. It’s a special occasion to see the pre-game ceremony, happen in the lead up to the match really adds to the occasion and portrays the extra meaning. “Before the match I think it’s crucial that we take the time to think about the sacrifices these people have made for our country and thank them – it’s something that definitely hits home for me.”

Prematch ceremony will be held and a BBQ for members at Gosford Bowling Club. Full details at the Central Coast Mariners Web site.