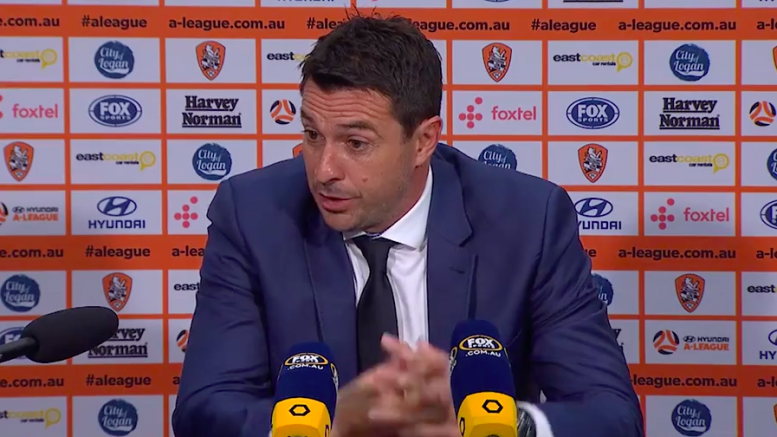 The Central Coast Mariners played out a nil-all draw against Brisbane Roar at Suncorp Stadium on Sunday, November 5.

After a hard-fought 90 minutes, the Mariners were left to rue missed opportunities against Brisbane, but will take plenty of positives from their performance and a well-earned clean sheet away from home. Ben Kennedy made the most out of his first start in the A-league in over two years, with a fine display in goals, which included a sharp save in the last minute of the game to keep the scores 0-0. Both teams looked to impose themselves on the match in the early stages, but neither team could deliver the final blow.

Towards the end of the first half, chances continued to arise, and it was the Mariners who almost took the lead thanks to an Andrew Hoole set piece. Hoole’s delivery found a leaping Jake McGing, who drew Roar goal keeper, Jamie Young, into a sharp save. Antony Golec followed up with a header of his own that was cleared off the line. Asdrubal worked tirelessly in the front third, but the final pass just couldn’t find the feet of the Spanish attacker, who was unable to convert any chances in the first half.

Five minutes into the second half, De Silva had the best chance of the match, when a defensive mix up saw Brisbane’s, Mitch Oxborrow, play the ball straight to De Silva. De Silva controlled the ball, and placed his shot into the bottom corner, but Brisbane’s goalkeeper, Jamie Young, moved well to his left to keep the scores locked at 0-0. De Silva continued to cause havoc in the second half, and made a surging run into the front third with his explosive pace, before hitting the side netting with a shot.

A variety of chances fell to the Mariners in the later stages of the second half, however, they were unable to convert any of them. With 15 minutes left to play, Kwabena Appiah took to the field to create several chances in the front third, but the Mariners just couldn’t add the fi nishing touch. Deep into stoppage time, Brisbane went close to snatching all three points, when a corner found the head of Jade North, but Ben Kennedy made a super save in the last minute to keep the scores locked at 0-0. “I think it would have been unjust if we conceded that goal at the end there from a set piece,” Mariners’ Coach, Paul Okon, said.

“Daniel’s two opportunities should have hit the back of the net, but goals win games, and neither side managed to do that this evening. “In the first half we weren’t great, we struggled to keep the ball, but in the second half, we were excellent – we had more of the territory and more of the ball, and you’d like to think you could come away with more. The Mariners will be hoping to improve on their performance when they take on Sydney FC at Central Coast Stadium on Friday, November 10. Sydney FC remain undefeated in the A League, and are top of the league with 13 points, while the Mariners are currently in seventh place, with two points. “We’re not really looking at the ladder at the moment, it’s about how we can improve, and I think that we’re doing that,” Okon said.

Under 18s dance party in Gosford