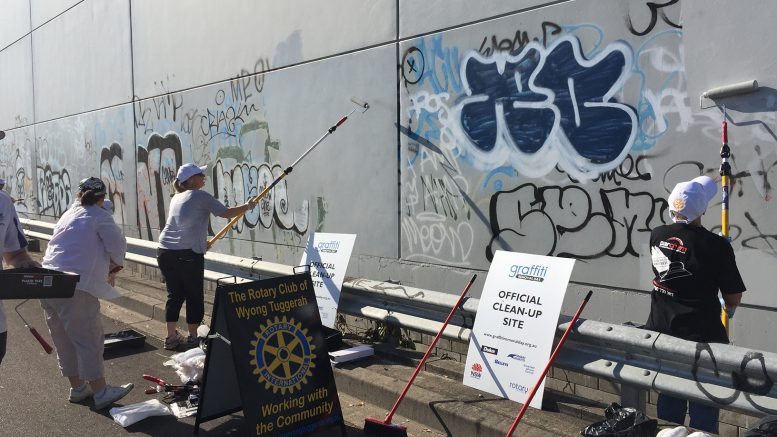 Central Coast Rotary Club members joined with the local council and several members of the community to fight graffiti vandalism on October 29.
Volunteers removed 140 square metres of graffiti from 17 sites, including sites in Tuggerah, Wyong and Blue Haven.
The work was part of the State-wide Graffiti Removal Day, which has been described by Central Coast Graffiti Removal Day Co-ordinator, John Greenway, as a great success.
“This was a great opportunity for the local community to prove just how much we love where we live,” Mr Greenway said.
“The day would not have been possible without the NSW Government, Dulux, Selleys, and Smart Graffiti, and I would like to thank them for their support,” he said.
Mr Greenway also pointed out that Graffiti Removal Day was only part of the solution in the fight against graffiti.
“While the day was a success in removing graffiti, it is important to remember that it is only one day of the year, but the fight against graffiti continues throughout the year.
“To stop graffiti vandalism we need members of the community to report it as soon as they see it, by calling the Graffiti Hotline 1800 707 125.
“This means that it can be removed quickly, preventing vandals from getting any kind of exposure.
“People interested in volunteering their time to help remove graffiti on an ongoing basis are encouraged to contact Graffiti Removal Australia.