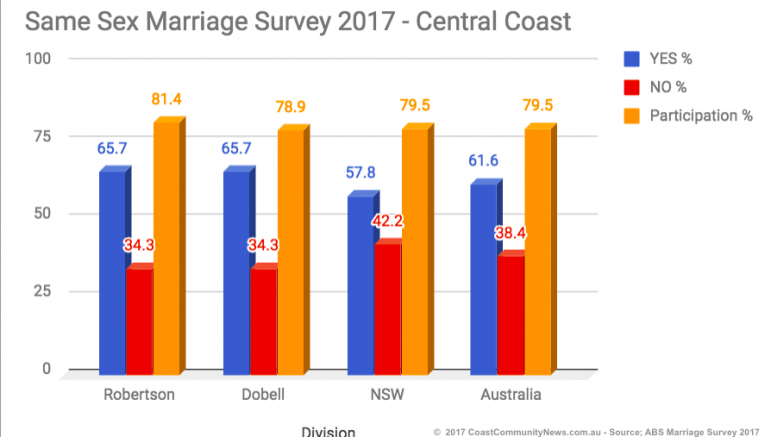 The results are in on the Same Sex Marriage Survey, with 61 per cent of Australians voting to expand the definition of marriage to include two consenting adults, regardless of gender.
Central Coast voters put in a 65.7 per cent yes vote compared to a NSW average of just 57.8 per cent, making both the Central Coast federal electoral divisions of Dobell and Robertson among the more pro-equality electorates in the State.
The largest pro vote in the state of NSW was Sydney CBD, where 81 per cent of voters voted ‘yes’, while, in a surprising result, Parramatta was among the electorates that recorded a 61 per cent ‘no’ vote.
All states and territories recorded a majority ‘yes’ response: 133 of the 150 Federal Electoral Divisions recorded a majority ‘yes’ response, and 17 of the 150 Federal Electoral Divisions recorded a majority ‘No’ response.
Member for Robertson, Ms Lucy Wicks, indicated that she would respect the vote of her electorate, despite voting ’no’ in the survey.
In a twitter question with local SeaFM radio journalist, Emma Horn, Ms Wicks tweeted: “Hi Emma, you’re right, I voted no.
“After 10:00am, if the Australian people say yes, I will respect and reflect the decision and say yes to facilitate a bill through Parliament,” Ms Wicks said.
“I’d ask others to respect the result too – whatever way Australia decides.”
The national participation rate was high, as nearly 8 out of 10 eligible Australians (79.5%) expressed their view.
The survey was undertaken by the Australian Bureau of Statistics (ABS) rather than the Electoral Commission, as it is officially a non binding survey rather than a binding plebiscite.
The link to the ABS website for the marriage survey is marriagesurvey.abs.gov.au/results/

Council is drawing up a list of assets to sell