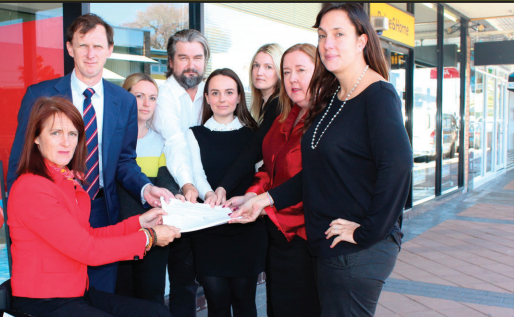 Local public servants have joined with the member for Gosford, Ms Liesl Tesch, to start a petition to save a specialist domestic and family violence case management and referral service that has been co-located within the Brisbane Water Local Area Command.

NSW Shadow Minister for the Prevention of Domestic Violence and Sexual Assault, Ms Jenny Aitchison, joined Ms Tesch and her fellow Coast Labor MPs, Mr David Mehan, Member for The Entrance, and Mr David Harris, Shadow Minister for the Central Coast, on Wednesday, July 26, to launch the petition. The Central Coast Integrated Domestic and Family Violence Service (known as CCAdvice) was launched in October 2010 to provide specialist case management and referral services to victims and survivors of domestic and family violence. CCAdvice worked closely with police, social workers and psychologists to support victims and survivors to report crimes, and go through the court process.

Similar services operate under the auspices of the Dubbo Local Area Command, and in Nowra, under the local PCYC. The NSW Police Force’s Northern Region formally advised the Department of Family and Community Services (FACS) in May 2017 of its decision to relinquish funding for the CCAdvice program from September 30. Existing staff will be sacked and a new provider will take over.

According to Ms Aitchison, staff employed in the service have had their access to computer systems cut, and have noticed a dwindling number of referrals since the announcement. There are concerns that key partnerships with relevant stakeholders to deliver integrated services on the Central Coast are at risk, Ms Aitchison said. The NSW Government has introduced a new Safer Pathways process that it has stated, which would mean that all domestic violence incidents reported to the NSW Police Force would be referred to the nearest Women’s Domestic Court Advocacy Service, instead of the previous direct referral arrangements between the police and CCAdvice. “The Safer Pathways model does have provision for direct referrals to service providers such as CCAdvice by the police, as well as supporting victims with an existing relationship with a Domestic and Family Violence or other specialist service to continue to be supported by that service,” Ms Aitchison said.

“Yet again we see the Government tweaking its Safer Pathways Model on the run, sacking dedicated workers in the sector, and leaving huge gaps in relationships with stakeholders,” she said. “CCAdvice is an innovative service which provides highlevel support to victims and survivors of domestic and family violence. “The decision to relinquish the funding will mean a huge loss of expertise on the Coast and a lost opportunity for greater collaboration between Police and the sector.” According to Ms Tesch, the service offered by CCAdvice over the past seven years had been to work “hand in glove with local police to assist victims. “When someone comes to the station they may be highly agitated and worried about their situation,” Ms Tesch said.

“It is the job of the police to get a statement from that person so they can prosecute a case, but CCAdvice has provided the specialist case management and referral service where they could work with the people to get that evidence,” she said. “The NSW Government has been slowly dismantling this innovative service but they haven’t replaced it and their new model is a referral roundabout.”