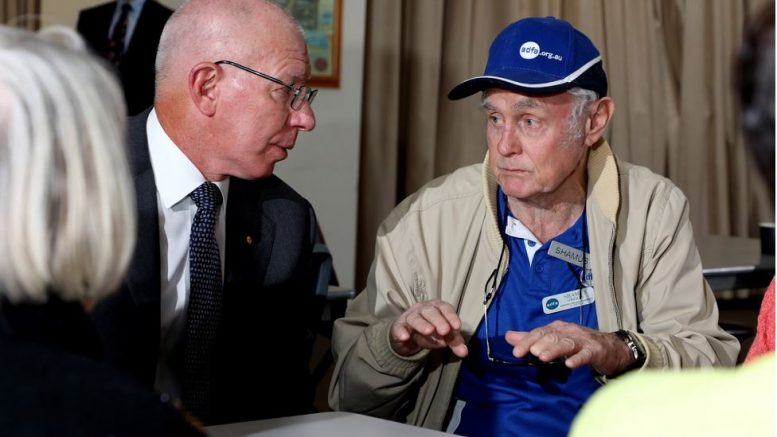 Gosford residents who suffer from asbestos related diseases or have lost loved ones to them, met with NSW Governor, Mr David Hurley, to discuss the impact the deadly fibre continues to have on the community.

Mr Shamus O’Reilly and Ms Beverly-Rose Grant, were just two Central Coast residents who attended the meeting and are also members of the Asbestos Diseases Foundation of Australia (ADFA), which organised the meeting.
“It was an honour to have Governor Hurley and his wife Linda, take the time to visit our organisation and meet with people suffering from asbestos diseases,” ADFA president, Mr Barry Robson said.
“ADFA’s members, supporters, and volunteers were extremely excited to have the opportunity to meet with Governor Hurley, to share their personal stories, and to provide details of our ongoing efforts to support asbestos victims and their families.
“Governor Hurley has a greater awareness than most people in the community about the dangers of asbestos and the terrible human toll it continues to take.
“Not only is he the son of a steelworker, an occupation that, like many in manufacturing, often resulted in exposure to asbestos, but Governor Hurley spent 42 years serving in the Defence Force, which is another sector that has higher rates of asbestos-related diseases.
As a nation, Australia continues to have the highest per capita rate of asbestos-related disease anywhere on earth,” he continued.
“Over the next four decades, it is estimated that 25,000 Australians will die from mesothelioma, an aggressive cancer caused by asbestos exposure, while double that number are expected to die from other lung cancers caused by exposure to asbestos fibres.
“For every one of these people whose lives are cut short by asbestos, there are countless family and friends left to mourn a loved one who was taken away too soon,” Mr Robson concluded.

Asbestos management policy to be placed on public exhibition