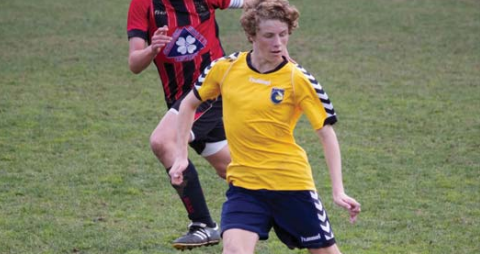 Central Coast Mariner Trent Buhagiar of Umina has successfully competed in Australia’s Under-23s national team to achieve qualification to the 2018 AFC U-23 Championship.

After an intensive week long training camp, Trent was named in the 23-man squad in early July. He was then one of 20 who fl ew out to Myanmar on July 15, in preparation for their fi rst qualifying match to determine whether the side would compete in the AFC U-23 Championship China 2018. Touted by some as the quickest player in the Central Coast Mariners’ squad, Buhagiar was born, raised and has spent the entirety of his football career on the Peninsula and then with the Central Coast Mariners.

Known for his pace as an attacking winger, Buhagiar is a product of the International Football School, Kariong, and signed his first A-League contract during the 2016 January transfer window. Buhagiar was a Umina Eagles junior and has spent the off-season plying his trade with the Central Coast Mariners’ Academy.

His debut game for the yellow and navy was against Melbourne City in February 2016 and his maiden goal in the A-League came in December of the same year against Melbourne Victory. Buhagiar and the rest of the Under 23s squad faced off against Brunei Darussalam in their first match on July 19, met with Singapore on July 21, and locked horns with host nation Myanmar on July 23. Australia topped Group F without conceding a single goal in three matches, beating hosts Myanmar 3 to 0. Buhagiar would be eligible to play, if selected in the 2018 U23 Championship as he was born in 1998 and players born on or after January 1, 1995, will be in the running for selection.