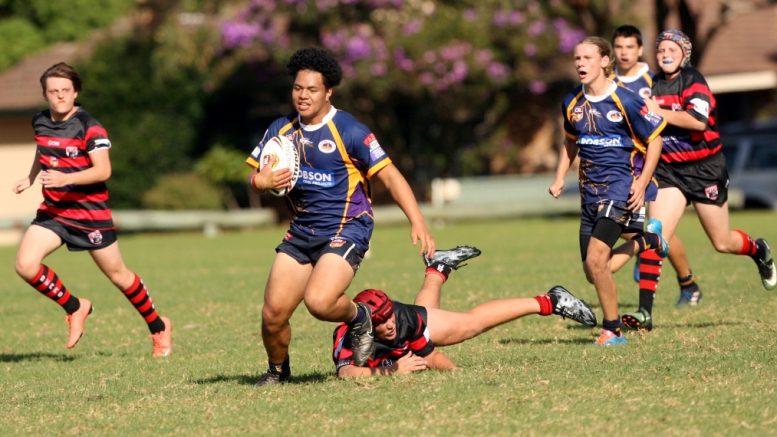 The Gosford Kariong Storm U16(2)s rugby league team won their first game of the season, courtesy of a hard fought 28-22 win over St Edwards on Saturday, May 13.
Dion Findlay’s team ran to a handsome 26-10 lead midway through the second half before giving their coach heart palpitations as they lost a player to the sheds, became cavalier with possession and proceeded to concede back two back tries to allow the spirited Bears to get back to within four points late in the game.
A last minute Byron Buckley penalty goal, kicked forcefully into the throng of Gosford fans as they chanted raucously for their team, rounded out the Storm’s advantage at a neat and tidy half dozen.
In a fine all team display, representative forward, Suli Hakalo, was once again a tower of strength in both attack and defence, while Joel Campbell had a game to remember as he bagged himself a hat-trick of tries.
The bullocking fullback also delivered the final pass for centre, Ben Martin’s, second half try having run onto a perfectly weighted Byron Buckley chip kick.
The Gosford U11(1)s weren’t quite as fortunate as their more senior club mates, falling 12-0 to a well-structured Terrigal side in the early morning game at Brendan Franklin Oval.
It was a grinding defensive game which yielded just the two tries; sadly both were scored by the opposition lads wearing sky blue.
For the vanquished, Storm prop, Lorenzo Godoy, worked tirelessly up centre field and Benji Keene-O’Keefe tried every one of his tricks to prize open a Terrigal defensive line, which closely resembled a concrete wall.
Gosford’s narrow loss followed on from their thrilling 28-24 win over the previously unbeaten Berkeley Vale in the previous round.
A game which saw the Storm shock the visitors early on, rumbling to a 10-0 lead, before clinging to a 22-18 advantage late in the game.
The Panthers looked to have snatched the win with just two minutes left to play, when for the first time in the match, they hit the front.
Gosford however were not to be denied and the irrepressible Benji Keene-O’Keefe was able to dash over out wide to score his fourth try of the game; the Storm home crowd jumping for joy as the local boys notched their first win of the season.
The Gosford U12(3)s have continued on their wining way courtesy of a 24-16 win over Wyong at Berkeley Vale with the Storm now ranking as outright leaders in this division.
The club’s battling Open Grade has extended their losing streak to 43 matches courtesy of a 54-6 loss to title favourites, St Edwards.