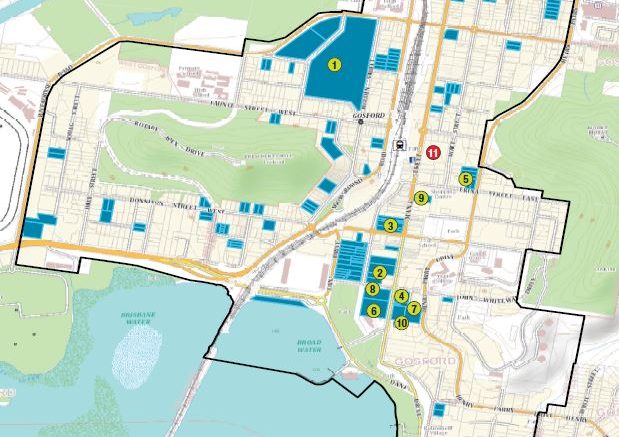 A map showing all approved developments valued at $1.5 million or over in Gosford City Source Central Coast Council

Gosford could be on its way to being the $1.6 billion city, but several key developers are running out of time to commence their projects.
A map prepared by Central Coast Council’s Environment and Planning Team shows the site of every approved development in Gosford City with a value of $1.5 million or more.
That includes 22 development sites on the west side of the train line and another 34 approved DAs east of the train tracks.
The total value of those 56 developments, according to Central Coast Council, is $1.6 billion.
“Council has laid down the platform to encourage development and the revitalisation of the Gosford CBD,” said Group Leader, Environment and Planning, Mr Scott Cox.
Mr Cox said Council’s vision is to see Gosford become a “vibrant, smart, regional living city centre, and we will continue to lay down that foundation, particularly with the Central Coast Regional Plan that looks into the five different precincts in the Gosford CBD, and we will look at doing further planning around the five precincts,” he said.
The $1.6 billion worth of construction projects that are on the books as having development consent, either from Council or the Joint Regional Planning Panel (JRPP) or both, are at various stages of commencement or working towards commencement.
A development cannot commence until it has a construction certificate, attainable through either a private certifier or through Central Coast Council.
“A construction certificate can take hours or months, it depends on what requirements of the consent need to be met before a construction certificate is issued,” Mr Cox said.
He said Central Coast Council does not have any authority to direct a developer or landowner to activate a construction project once a DA has been approved.
“All we can do is make sure that the site is kept safe in terms of hording or adequate fencing,” he said.
“I am aware of talk that a number of private developments will commence this year, such as Waterside and Bonython Tower, but in terms of construction certificates, I have not seen any as yet,” Mr Cox said.
Many of the larger projects that are yet to lodge construction certificates have two-year consents.
“Time is running out on their consents, so they will need to act quickly if they want to get physical commencement and start those developments,” he said.
“It is not an unlimited timeframe.”
Crunch time is fast approaching for a number of key sites.
The development consent for the $157 million Mariner Plaza on the corner of Donnison and Mann Sts expires on May 21.
Another $36.6 million development consent on the corner of Erina St and Henry Parry Dve has a consent that expires on May 20 and no construction certificate has been lodged.
December will be another pivotal month for the future of the Gosford CBD, when the $234 million triple tower DA on the corner of Mann St and Georgiana Tce runs out, along with the John Singleton-backed Bonython Tower in Mann St, valued at $17.63 million.
There is an opportunity for developers to seek an extension for a third year, but that is the maximum that was allowed under the incentives put in place by the former Gosford Council in an effort to kick start a CBD revitalisation.
“They are not likely to want to lose the bonus floor space and height incentives, especially when the hard work has been done in gaining approval.”
Mr Cox said there is a regular dialogue between Council and developers with approved projects in Gosford.
“We have ongoing discussions, particularly because once a consent is granted on large developments, there are a lot of amendments made, normally to progress towards a construction certificate.”
Central Coast Council received 138 submissions relating to its proposed rezoning in the Gosford CBD, which included changes to floor space and height limits, based on the proposed Lederer Group development in the old Marketplace shopping centre (Kibbleplex).
“We are still working through the submissions to put up a recommendation to the Administrator.
“We will be making amendments to the Development Control Plan, which is a separate document, to include guidelines around the commercial core, based on feedback that the proposal we exhibited was too prescriptive and not flexible enough.
“We are taking that on board and seeking endorsement to re-exhibit the DCP, and the whole community consultation process for the DCP.”
If the planning proposal and DCP are endorsed by the Administrator, it will then be up to the NSW Department of Planning and the Minister, Mr Anthony Roberts, to approve.
“It goes into the mysterious Department of Planning; it is a decision for the Minister,” Mr Cox said.
“I can’t answer what Gosford is going to look like in the future, but we have already started to lay down our platform and will encourage developers to deliver a vibrant city with a full range of business, retail, cultural, recreational and entertainment opportunities.
“The private developments under way will create hundreds of accommodation facilities, brand new restaurants and services adding to the local economy.
“The construction of the ATO site is under way, and along with that the finance building.
“That alone is going to provide an additional 1,000 jobs to the local community and then you add all the construction jobs, all adding to boost the CBD economy.
“Confidence is a big thing,” Mr Cox said.
“Once you get a major private developer to start, it will add confidence, and with each development comes Section 94 contributions, so council can do public domain improvements,” he said.