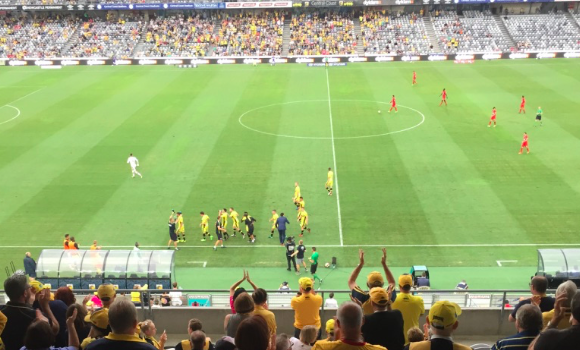 After an end-to-end first half it was the Mariners who struck first through Kwabena Appiah thanks to a pinpoint Storm Roux delivery into the box.

With both sides struggling to keep possession in the opening stages of the first half, chances started to fly from the twenty minute mark where both goalkeepers were forced into making smart saves to keep the score on even terms before Appiah’s opener on the stroke of half time.

Special mentions in the first half go to Liam Rose who was immense in his newly found position as a centre back as well as Appiah who seemed to have his hand in every Mariners’ attack.

Unfortunately for the Mariners it was a game of two halves and Gui Amor’s Adelaide came out of the box flying in the second stanza with new striker, Baba Diawara doing most of the damage in the front third for the Reds. They managed three goals in the first 20 minutes of play.

Okon will be disappointed in the fashion they were conceded. The first was a defensive lapse that was capitalised on by Diawara the second and third were both from corners, an area where the Mariners have been strong all season.

Despite a 3-1 defecit the Mariners weren’t done fighting and came home strong to create a grandstand finish thanks to a spot kick by Roy O’Donovan.

The Mariners went agonisingly close to an equaliser in stoppage time after a charging run by Fabio Ferreira but it wasn’t to be for the Yellow & Navy.

Full focus now turns to Hyundai A-League Round 25 that will see the Mariners face Brisbane Roar at Suncorp Stadium,

1-0 Central Coast Mariners – Kwabena Appiah 44’
After taking control in the first half, the Mariners struck in the 44th minute after a perfect cross from Roux found the head of leaping Appiah. Despite a full stretched dive from Adelaide custodian Eugene Galekovic, Appiah sent the ball flying into the bottom corner with his impressive header.

1-1 Adelaide United – Baba Diawara 56’
Adelaide went level in the 56th minute after a defensive lapse from the Mariners which allowed United’s Senegalese striker to fire from close range, leaving Ivan Necevski with no chance.

2-3 Central Coast Mariners – Roy O’Donovan 90’
Roy O’Donovan scored from the spot in the 90th minute, after United midfielder Jae Sung Kim was judged to of handled the ball inside his own box.

Paolo in the press

“We’ve prided outselves all season on the fact that on defensive set pieces we’ve been excellent and tonight to concede two in 10 minutes is really disappointing and in the end probably cost us the result so from that perspective it can’t happen,” Okon said.

“But we had chances as well – in that first half we totally dominated them and we probably needed to score more goals. Then Adelaide came out in the second half, raised the tempo a bit and I felt that we didn’t deal with that. We weren’t able to move the ball, to keep the ball – maybe it’s a bit of inexperience but overall it’s certainly a disappointing result.

“The other team gets a bit of momentum, some maybe dropped their heads and then when you need to concentrate and make sure you’re strong, brave and defend we didn’t do that – that’s why concede two goals.

“We have three games to go, we wil continue to try and win all three. There’s some pretty disappointed boys in the changeroom and rightly so, but we can’t stay disappointed for too long because we go to Brisbane next week and face another very good opposition who want to try and cement their position in the top four.

“We need to recover, get back out there, train and be better next weekend.

“We need to maintain that first half performance for longer periods of the game. Which is going to be tough because I don’t think too many teams go up there and dominate Brisbane but we will play our football and do our best to win the game,” Okon said.

Mariners back to their winning ways

John Hutchinson is now a life member of Men of Football