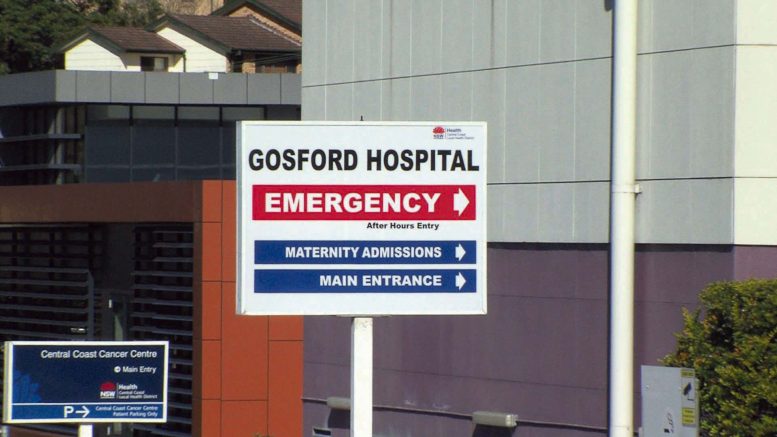 The latest report out by the Bureau of Health Information (BHI) shows “significant improvement” in emergency department and elective surgery wait times at Gosford Hospital, according to NSW Minister for Health Mr Brad Hazzard.
Mr Hazzard congratulated staff in the Central Coast Local Health District, who, he said, performed extremely well for the October-December quarter in 2016, according to the BHI Hospital Quarterly report.
“More people are coming through the doors of our world-class public hospitals than ever before and even with that challenge, our Central Coast hospitals are delivering first-class care,” said Mr Hazzard.
“A big thank you to the staff at Gosford.
“I’ve recently sat with them and they are amazing, dedicated people – and the latest statistics emphasise their incredible work.”
According to the report, the median time triage two (emergency) patients waited to start treatment in Gosford Hospital’s emergency department was six minutes, unchanged since the same period in 2013.
It is faster than the median emergency department wait time in NSW, which is eight minutes this quarter.
The report found reduced waiting times for triage three (urgent), triage four (semi-urgent) and triage five (non-urgent) patients at Gosford Hospital.
Gosford Hospital had 16,251 emergency presentations this quarter, an increase of 2.5 per cent since the same period last year.
For elective surgery wait times, 100 per cent of patients awaiting urgent surgery at Gosford Hospital received it within the clinically recommended timeframe of 30 days.
For semi-urgent surgery, 95.4 per cent of patients received the surgery within the clinically recommended timeframe of 90 days, a figure down from 100 per cent from the same period last quarter.
For patients awaiting non-urgent surgery, 93.4 per cent received it within the clinically recommended timeframe of 365 days, a figure down from 98.6 per cent from the same period last quarter.
Gosford Hospital had 1,556 patients receive elective surgery this quarter.
Mr Hazzard said wait times had improved under a Liberal State Government.
“In 2010 under State Labor, when there were less patients coming through the door, only 91 per cent of Central Coast patients got their elective surgery on time.
“Now, 97 per cent get their elective surgery on time and we are expecting even better results when the community and staff experience the wonderful, new $348 million facilities at Gosford Hospital,” Mr Hazzard said.
Liberal candidate for the Gosford By-election, Ms Jilly Pilon, said patients were leaving the emergency department at Gosford Hospitals much quicker than when Labor was in government.
“At Gosford Hospital, we’ve seen an impressive jump from just 49 per cent of patients leaving the emergency department within four hours to over 68 per cent.
“The Gosford Hospital redevelopment will ensure an even greater level of patient care and services to meet the growing needs of our community,” she said.
NSW Shadow Minister for Health, Mr Walt Secord, said Gosford Hospital continues to be under pressure.
“The Liberals have dropped the ball on health and hospitals,” Mr Secord said.
“Their only approach is to privatise the health and hospital system.
“Labor supports a strong public health and hospital system.
“That is why we need new approaches to health such as Nurse Walk-in Centres to take the pressure off emergency departments.
“Under the Liberals and the Nationals, the health and hospital system lurches from crisis to crisis.”