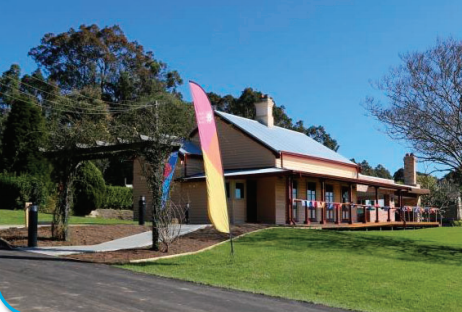 More space is required for volunteers at the rebuilt Alison Homestead

Volunteer groups at Alison Homestead, home of the Wyong District Museum and Historical Society, are at loggerheads with Central Coast Council over their desire to build a new office and an extension to the onsite Men’s Shed.
“It is with regret that the administration of Alison Homestead has come to realise that the Central Coast Council has no intention of supporting the efforts of the volunteers in creating a site that depicts the heritage of the pioneers who created Wyong and the surrounding district,” said Mr Greg Denning, President of the Wyong District Museum and Historical Society.
“With the new beginning following the arson attack on the property five years ago, the Museum volunteers are committed to modernising the methods and practices they use to guarantee its long term viability,” Mr Denning said.
“It will allow the Museum to become an integral part of the community providing opportunities for participation by members of the local community in a wide variety of roles and also ensure the site establishes itself as a venue for both local and out-of-area visits,” he said.
According to Mr Denning, the onsite Men’s Shed extension is necessary to provide an efficient and safe workplace as well as enabling the membership and projects to continue to grow.
The Society and the Men’s Shed have both been successful in obtaining State Government grants for a new office and  extension.
“The volunteers have been in negotiation with Council for the past three years regarding these projects and are now to the point of losing the money due to the lack of a resolution,” he said.
Central Coast Council responded to the volunteers’ call for action with a written statement.
It said: “Council has worked closely with the Association to restore the historic building following the devastating fire in 2011.
“Council was able to rebuild this important community asset, to the value of $1.2 million, from insurance over the building.
“Central Coast Council (former Wyong Shire) has provided $30,000 to support the group to purchase equipment to host their centenary celebrations as well as training and development of volunteers.
“Council is currently negotiating a new lease arrangement with the Wyong District Museum and Historical Society Association for the Alison Homestead at Wyong.
“The new lease arrangements will involve a Plan of Management (POM) to guide all future operation and strategic decisions for the historic Homestead, including what extra buildings or facilities are needed on the site.
“Council has written to Mr Denning advising that no Development Applications for the site can be considered without a POM in place.
“An on-site meeting with all stakeholders, including volunteers, has been held explaining this process.
“At the on-site meeting, Mr Denning was advised to send through all details for grants they have been awarded, and Council will provide… support for them to seek extensions until a POM is in place.”
According to Mr Denning, the Society applied to the NSW Government for a Community Building Partnership Grant of $32,000 to build a new office.
Mr Denning said the State funding was needed because the new building consisted of four display rooms, whereas the original Homestead had 12 rooms.
“The volunteers could not justify using any rooms in the new building as an office as it would limit the area available for Museum displays.
“We did not submit a DA to Council prior to applying for the grant as we had already been closed for three years since the arson attack in 2011, whilst maintaining the property at our own expense, and our reserves were seriously depleted.
“Council spent two years deciding whether to rebuild, and then having finally bowed to pressure from the community, they then took another three years to rebuild.
“When we were notified this grant was successful in January 2015, we submitted a DA to Council to build a new office.
“We believed the project would only enhance the site for the community and that the 12-month timeframe of the grant would allow for the DA to be processed and the project completed.
“We did not hear anything for about three months, so we contacted Council asking about its progress, to be told they could not find the DA.
“When they did locate it, staff … met with us in May to discuss the proposal, and …we raised the issue of a possible addition to the onsite Men’s Shed.
“Following that meeting, Council requested a letter outlining our justification for both additions.
“In July 2015, the Men’s Shed submitted a DA for the extension to their shed and applied for a State Government Grant of $13,000.
“In September 2015, the Property and Asset Management team again called a meeting and informed us the DAs required extra details and  they would not approve any onsite developments until they undertook a full site assessment.
“We followed up on this in October 2016 and were advised to resubmit the DAs.
“On November 29, we received Council’s email stating that any submissions seeking owner’s consent on DAs would not be considered until they had developed a Plan of Management.
“Council then met with us on December 5 where they reiterated that the POM would be developed between Dec 2016 and May 2017.
“Both these grants had already been extended until March 31, 2017.