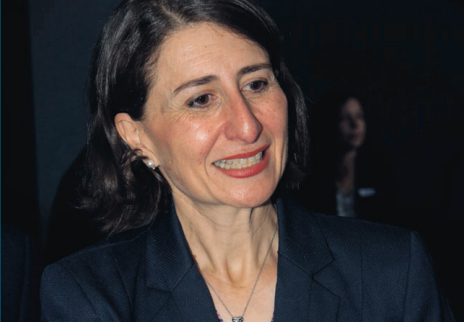 New South Wales Premier, Ms Gladys Berejiklian, during her visit to the region for a Community Cabinet meeting, was not prepared to confirm that the Central Coast would have a local election in September.

Wyong Regional Chronicle asked Ms Berejiklian to confirm that the first election for the Central Coast Council would occur in September.

The Premier said: “We know, the feedback I have been getting is, that people are so happy with the current arrangements up here on the Coast. “The merger has gone extremely well, that is the feedback I have been getting, not just from the local members, but also from the community, and people want to ensure that continues,” she said. When asked if she would rule out an extension of the current Administration period for the Central Coast Council, Ms Berejiklian said: “No, I’m not ruling anything in or out. “All that I am saying is the feedback we have had is that it is an extremely positive experience and we are seeing a difference on the ground. “We are seeing less time taken to approve developments.

“You’ve got to remember this is about the local community, it is not about how governments work, and what I have seen is really positive.” Ms Berejiklian has been under pressure to reconsider the Government’s position on Council mergers since taking over as NSW Premier from Mr Mike Baird. For example, the State Member for Wyong, Mr David Harris, who is also Shadow Minister for the Central Coast, has called for a plebiscite to give the Central Coast community the opportunity to decide whether or not it retains the two old councils or continues with a single Central Coast Council.

The Premier said the issues and discussions surrounding council mergers were ongoing, but Deputy Premier, Mr John Barilaro, was believed to be pressuring for a review of some mergers. When asked if she felt she had been “backed into a corner” by her deputy on the issue, Ms Berejiklian said: “Can I just say I have been really pleased with how this team has come together to work together on issues.

“There’s no doubt there are always issues that challenge all state governments and I am so proud of the team. “We are working together extremely closely, extremely well, and the fact that all of us are up here together on the Central Coast demonstrates and speaks volumes about the kind of government we will be,” she said.

The Premier and her 22-minister Cabinet were at Mingara Recreation Club, Tumbi Umbi, for a Community Cabinet meeting followed by a formal Cabinet meeting, on Thursday, February 9. “Our job as a government is to get around the State, listening to communities, working out what they believe their priorities are, investing more in local infrastructure, schools, roads, hospitals, as well as the other services that make our communities vibrant.

“I think people in the region appreciate that we are up here. “We have leaders of the Central Coast from across the region here, together, not just telling me, but the entire Cabinet and the local members, what they think and what they want as priorities.

“We’ve made some investments in the region already when it comes to things like the Gosford hospital, local road upgrades, local school upgrades, but we know there is more to do and that is exactly why we are here today,” she said. Stakeholders from a diverse range of Central Coast organisations were invited to Mingara for a morning tea and an opportunity to meet face-to-face with NSW Ministers to discuss their concerns and priorities.

This article was first published in the Wyong Chronicle on Feb, 14, 2017