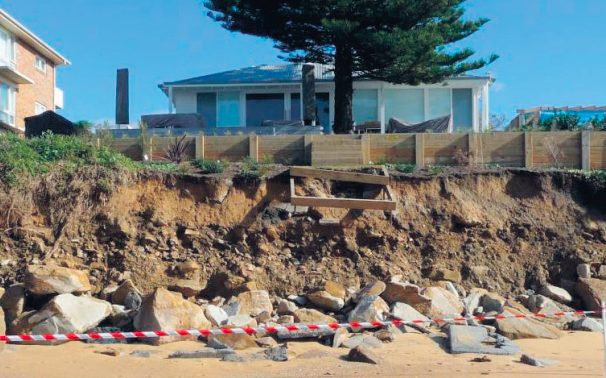 Coastal Residents Incorporated has called on the NSW Minister for Planning, Mr Rob Stokes, to delay the introduction of the new Coastal Zone Management Act and associated reforms until accurate mapping is made available to the public.

Mr Pat Aiken, Secretary of Coastal Residents Inc, said the Act was passed by the NSW Parliament in June 2016 and was waiting to be proclaimed immediately after the close of consultation for the new Coastal Management State Environmental Planning Policy (SEPP) which ended on January 20. “The consultation period ended despite just one short information session and the lack of critical detail in the form of promised maps that would explain how many people would be affected if sea levels rise to the heights claimed by local government,” Mr Aiken said. “They don’t want people to know,” he said.

“The use of timed consents would mean temporary buildings, temporary use of land and the use of ambulatory boundaries would override current Torrens Title and allow submerged lands to automatically revert to the Crown with no compensation,” he said. “This directly affects more than 10 per cent of the Central Coast population. “In Sydney the Coastal Zone extends up to 200 metres from tidal waters but on the Central Coast it is 1,000 metres so the impact on Central Coast residents is far greater,” he said. On January 18, Mr Aiken wrote to Mr Stokes “to confirm certain critical errors in the consultation mapping documents for the Central Coast … has led to residents and property owners in large numbers … being misled as to whether the proposed reforms affect them.”

Mr Aiken said maps used during the consultation period for the Draft SEPP misrepresented to “tens of thousands of property owners” including those on the Central Coast, that their properties were not affected by the proposed reforms. “Residents have been misled and don’t understand they are affected by a draconian framework of legislation that enforces planned retreat and will result in the expropriation by government of land affected by current and future coastal hazards.” Mr Aiken said the risk of inundation and flooding in low lying suburbs had not been identified in the Draft SEPP mapping because that mapping did not show current hazard levels.

“Of the 59,000 coastal properties affected by the Draft Coastal Management SEPP, it is estimated that at least 14,000 of those properties are on the Central Coast – they are affected by the current and future coastal hazards of tidal inundation and combined catchment and storm surge flooding. “It is a case of negligence or incompetence that the NSW Government has failed to include this readily-available information with the Draft SEPP mapping of coastal hazards,” Mr Aiken said. Mr Aiken said once the “flawed” SEPP is proclaimed, all other components of the new NSW Government Coastal Management legislative framework will come into play. “It does not go back to Parliament, but I hope it can be delayed so more debate can be allowed when Parliament resumes,” he said.

He said the NSW Office of Environment and Heritage (OEH) had been a key stakeholder in the development of local government Coastal Zone Management Plans and Floodplain Risk Management Plans. The office had representatives on the council committees that developed those plans and the comprehensive mapping of coastal hazards. The NSW OEH has been virtually the sole provider of the funding used to develop these coastal management plans, he said. “Without the substantial grants of funds for such projects, there would be no mapping and no plans,” he said. “It is either disingenuous or due to a lack of capability that the NSW State Government now suggests that the flawed content and omissions of the Local Government Hazard Mapping is entirely the responsibility of local government. “Our association does not accept this repeated claim by the NSW Government.

“The consultation process is fl awed in material and misleading ways. “Residents have been misled,” he said. Mr Stokes and other state MPs had promised that the new Coastal Zones Management Act wouldn’t come into force until there had been full consultation and public participation with all the mapping available for all residents to view. “We are also very concerned that a large part of the exhibition period has occurred during a traditional period of holidays for most Australians,” he said. Mr Aiken called on Mr Stokes to delay implementation of the Coastal Management Act and associated reforms until all mapping associated with the Draft CM SEPP was completed to a standard acceptable for consultation and public participation.

He asked that “accurate mapping for all coastal hazards be prepared and put on exhibition for comment and that all other mapping should be carefully checked with a particular emphasis on littoral forest and wetland mapping”. Mr Aiken said he believed demand by purchasers for properties affected by vulnerability mapping would decline as, once the new framework is implemented, notations will be included on S149(2) Planning Certificates explaining that a property is affected by current and future coastal hazards.