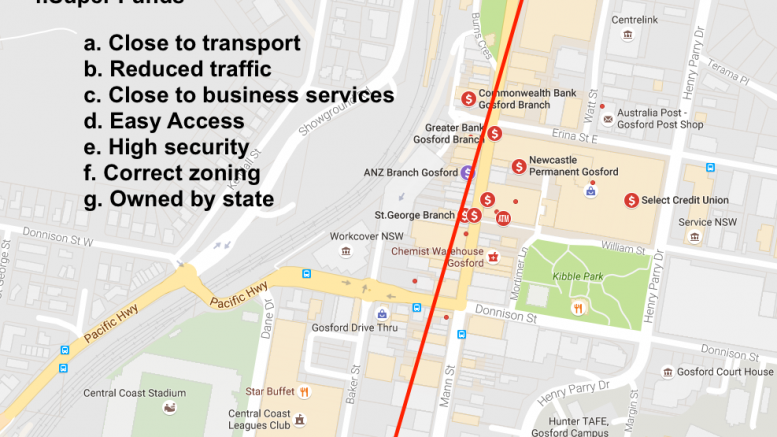 The proposed Finance District in the CBD, away from the waterfront

The Gosford Waterfront Alliance (GWA) held a public meeting to update the community on its campaign to relocate the ATO and State Finance developments from the waterfront to other sites in the Gosford CBD so that the waterfront can become activated as an arts and recreation precinct.

The meeting was held at the Anglican Church in Mann St, Gosford, on October 19, and was addressed by Ms Margaret Hardy, a stalwart of the Central Coast arts community, and Mr Matthew Fraser, the barrister who will represent the Alliance in the Land and Environment Court on November 1 and 2.

Ms Claire Braund, President of the Gosford Waterfront Alliance, said she hoped the meeting would give community members a fuller understanding of the position of those advocating for arts and recreation on the site of the former Gosford Public School. Alliance member, Mr David Abrahams, also addressed the meeting about proposed realistic alternative sites in the Gosford CBD that the Alliance had identified for the ATO and State Finance Department office buildings.

Mr Abrahams told the crowd he had moved his business to Gosford 15 years ago because he believed in the city’s potential. “It is in fact a first rate place to run and grow an outwardly looking organisation; a great place to help grow a family,” Mr Abrahams said. He said the city had a large, skilled and motivated workforce and many commuters who would jump at the opportunities of working closer to home. Gosford, according to Mr Abrahams, also has a world class full fibre optic telecommunication network, incredibly accessible recreation, sport and cultural activities, and a high capacity transport system.

According to Mr Abrahams, the office developments on the waterfront for the ATO and Finance NSW were not part of the plan for Gosford’s future. “They betray the planning work done. “They were snuck though in an opaque fashion by offi cials that had no regard for the planning work, that had superficial regard for local history and heritage, and that have little regard for the local community. “They break the social contract that we had here in Gosford. “This is why we are so indignant, this is why we are pushing back, this is why we are fighting this. “We are fighting to get things back to the agreed plan, the consensus we had. “We are appealing to everyone to support the plan, because it is this that we can all get behind, something that will make Gosford not just a great city, but a beautiful and intelligent city.

“We at the GWA have an alternative plan for a smart finance precinct, not on the waterfront, but in the Central Business District (CBD). “We have found state government land in Gosford CBD, good land with great potential to make an intelligent relocation that will accelerate the CBD’s business growth and release the waterfront to be a great place for celebration.

“It seems parts of the State Government agree with some of the plan. “Last week’s release of the Central Coast Regional Plan 2036 defi nes the Arts and Entertainment Precinct, roughly as outlined in the Masterplan. “It has however corrupted the CBD zone away from the city centre and quietly encroaches on public land. “This is clearly a major mistake that will deprive existing CBD businesses of their aggregated livelihood. “We propose that the ATO and Finance Department build colocated facilities that meet the exacting requirements of such facilities.

“We propose that the developments on the Waterfront be sold back to the Council and that land be used for its intended purpose, performing arts, entertainment andeducation, all growth industries,” Mr Abrahams said. The meeting also discussed a workable and consensus-based solution for the waterfront to involve the State and Federal Governments, community and business groups, Central Coast Council and other involved stakeholders.

Ms Braund said the GWA was a formally constituted body advocating for a revitalisation of Gosford as the cultural and regional capital of the Central Coast. “We have a broad membership from business owners and residents who have a common interest to pursue the redevelopment of Gosford,” she said. “Our committee is drawn from a wide interest base. “While our current focus is the retention and promotion of the old school site and surrounding land on the Gosford waterfront as a cultural and performing arts precinct, we are committed to making the waterfront a vibrant cultural, recreational and educational precinct.

“As such we are strong advocates for the Gosford City Master plan that was created on the back of more than 1,000 submissions during the Our City Our Destiny process. “We believe this plan was of very high quality and represents a blueprint, not just for the waterfront, but for all the power precincts in Gosford. “This represents a major opportunity for the relocation of the ATO and State Finance offi ce in the CBD,” she said. Ms Margaret Hardy addressed the meeting about the history and context of performing arts on the Central Coast, and some of the historical background to that location that is currently the subject of the GWA’s Land and Environment Court challenge to the Doma Australian Taxation Office development.

A second NSW Government development application on the former public school land is currently waiting for a decision from the Joint Regional Planning Panel. The barrister who has taken on the GWA’s Court Case for no fee, Mr Matthew Fraser, updated the meeting on the status of the Land and Environment Court (LEC) action and outlined the particular procedural points the Alliance planned to move forward with in the Court. Ms Barbara Gardiner, a local resident, told the meeting how she had moved her young family from Sydney based on the excitement around the master plan and Gosford challenge. Ms Gardiner outlined her frustration with the lack of commitment from local government to deliver the master plan.

“We have put a hand out to everybody,” said Mr Abrahams. “We have talked to almost every single former councillor in Gosford and Wyong about our commitment and our plans,” he said. The Alliance was due to meet, for the fi rst time, with Central Coast Council CEO, Mr Rob Noble, in the week after the public meeting. “We will also be having a face-to-face meeting with the CEO for the state chamber of commerce on the Central Coast, Mr Dan Farmer, to inform him of our positive, pro development vision for Gosford.”

The Alliance is also attempting to meet with the Gosford Chamber following the public meeting in an attempt to explain its position. Ms Ali Vidler, President of the Gosford Chamber, has spoken in support of the current ATO development at the Joint Regional Planning Panel. State Member for Terrigal declined an invitation to send a representative to the public meeting and did not attend because the NSW Parliament was sitting. Representatives attended on behalf of the Member for Gosford, Ms Kathy Smith, and the Member for Wyong, Mr David Harris. Ms Tracie Howie performed the welcome to country. Chairman of the Central Coast Conservatorium, Mr Peter Brandon, introduced special guest, acclaimed violinist, Ms Charmian Gadd, who performed Bach at the meeting.