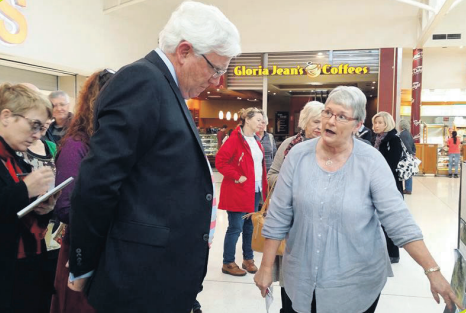 Save Central Coast Reserves has now been campaigning for 12 months to protect 24 local urban reserves, parks and green spaces which the council proposes to reclassify and sell-off. Site representatives and affected community members spoke to Mr Ian Reynolds, the Central Coast Council Administrator, and Mr Rob Noble, chief executive officer, to emphasise the importance of their neighbourhood sites, both to the community and the environment.

“Save Central Coast Reserves sincerely hopes that both Mr Reynolds and Mr Noble will decide to protect these sites as hundreds of residents have spent the last year fi ghting this move by council to raise revenue through the sale of community land,” said Save Central Coast Reserves organiser, Ms Sue Chidgey. “Hundreds of emails and submissions have been sent to council, before the amalgamation and after,” Ms Chidgey said. “Community members and local environment groups have attended public meetings and rallies, given speeches, presented petitions and run events to try to get our voice heard that community lands should not be sold, but kept as a valuable community resource, for now and the future,” she said.

Ms Chidgey said she believed the session had been worthwhile but wished council would hold an evening session to give working people an opportunity to meet with the Administrator and CEO. “I hope it was not just a tick the box for community consultation; I hope they are going to fi nally start listening to us,” she said “We are still none the wiser about the land sale strategy and whether or not the fi rst 10 blocks will be protected as community land. “It has been a year of concern and worry for residents and we hope Mr Noble will put a stop to that,” she said. Ms Chidgey said Mr Reynolds was hoping for the urgent report he had called for in August to be delivered to the September 14 Central Coast Council meeting.

Stephanie Foster is the 2017 Terrigal Woman of the Year