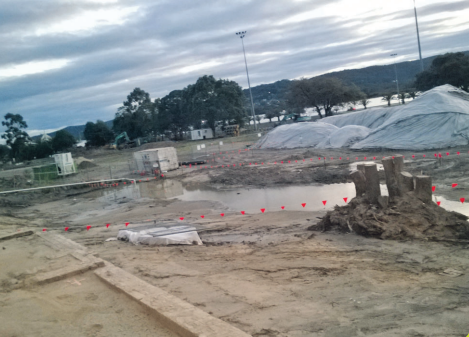 Claims and counter claims in the Land and Environment Court, the JRPP’s decision to defer a ruling on the NSW Finance building, and the growing perception that the Central Coast Council is neglecting Gosford, have left the city’s waterfront seeming more like a battlefield than an iconic site.

Doma, the developer of the Australian Taxation Office (ATO) building on the corner of Mann St and Georgiana Tce in Gosford, has launched its own Land and Environment Court action to secure coverage for legal costs in response to the Gosford Waterfront Alliance’s application to the Court to stop the development. Meanwhile, the ATO site has already been cleared, with a large mound of covered fill, exposed historic building remnants and tree stumps greeting all those who approach the city from Brian McGowan Bridge.

The NSW Government’s second proposed development on the former Gosford Public School land, to house staff from the NSW Department of Finance, has also hit a snag with the developer, in this case the Crown itself, in the form of the NSW Government, asking, at the September 15 briefing, for the JRPP to defer its decision on the development.

Concerns about the impact of the Land and Environment Court action were cited as one reason for requesting a deferral, because if the ATO building does not go ahead, the plans for the NSW Finance building will need to be rejigged. Gosford’s business leaders have argued, with increasing volume, that the mess on the Gosford Waterfront and the ongoing decay of the CBD, is being compounded by what it considers to be the new Central Coast Council’s failure to make the reinvigoration of the regional capital one of its priorities.

The surprise resignation of Ms Judy Jaeger, the recently appointed Group Leader of Customer and Community Relations, has compounded fears that the new Council under Administration has a Wyong or Northern Central Coast bias that has left committed and keen Gosford investors hanging. Ms Jaeger was the only remaining executive-level manager from the former Gosford Council on the new council’s leadership team.

The NSW Government’s regional plan for the Central Coast has clearly positioned Gosford as the region’s capital, but the city may have to wait until after the September 2017 local government election for a new governing body to pick up the pieces that appear to have been dropped by the current administration. See inside for separate articles on each of these issues….