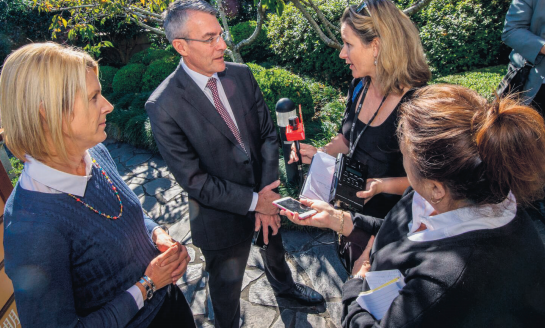 The project would be delivered in partnership with the Central Coast Council and would require the dissolution of the Liberal decision to build an Australian Tax Offi ce on the former Gosford Public School site. “The performing arts centre would provide jobs during the construction phase and while it operates,” Ms Charlton said. “Alongside the Central Coast Stadium, it will provide a drawcard for regional and interstate tourism and give our beautiful waterfront the premier attraction it deserves.”

Mr Dreyfus said $20 million would be committed to a regional performing arts centre by a Labor Government. He said the commitment would negate the NSW Government’s stipulation that an arts centre be built on the Poppy Park site. “Labor has already stated it will reassess the decision to put the ATO on the school site and move to have the offi ce built in the CBD where it would be of most value,” Mr Dreyfus said. “I was very pleased to be able to announce this boost to the arts and the local economy that will come from this project.”

Senator Deborah O’Neill said the announcement was a win for the Central Coast community on more than one level. “Not only will the Coast get a world-class arts complex to display our talent on our beautiful waterfront, but also the community has been heard by Labor,” Sen O’Neill said. “The decision by the Liberals to put two government buildings on prime land overlooking Brisbane Water was without consultation and against the community’s vision for the site,” she said. Ms Anne Charlton said the announcement recognised the almost nine-month campaign by the people of the region to keep the waterfront as valuable public space after the demolition. “It’s time to get this done.”

Member for Robertson, Ms Lucy Wicks, and the NSW Government, condemned Labor’s announcement on the regional performing arts centre for Gosford. “The Turnbull Liberal Team has a strong plan for more jobs on the Central Coast, including 600 new federal jobs, a new Central Coast medical school and a regional performing arts centre the community deserves,” Ms Wicks said. “Labor has put another $20 million on Bill Shorten’s ‘spend-o-metre’ and announced it would shift the proposed site of the Performing Arts Centre without any details like how it would actually buy the land. “It’s also clear that Labor has put no thought into how it will deliver on its fl aky promise. “Labor claimed that it has always wanted the performing arts centre on the school site, yet on numerous occasions, Labor Senator Deborah O’Neill has stood on Gosford City Park to commit funds there.

“After 50 years of debate, this is an insult to our community. NSW member for Terrigal, Mr Adam Crouch, said Labor’s plan was an “absolute joke. “The funding for our regional performing arts centre has already been delivered by all three levels of government,” Mr Crouch said. NSW parliamentary secretary for the Central Coast, Mr Scot MacDonald, said the commitment by Labor was cynical. “It’s frankly an insult to the Central Coast,” Mr MacDonald said. “The reason for the delay in building a regional performing arts centre is Labor’s obstructionism and politicisation of the project. “The NSW Government and Lucy Wicks have committed the necessary funds to proceed. “We are now working with the new Central Coast Council to design, develop and build a world class cultural asset.”