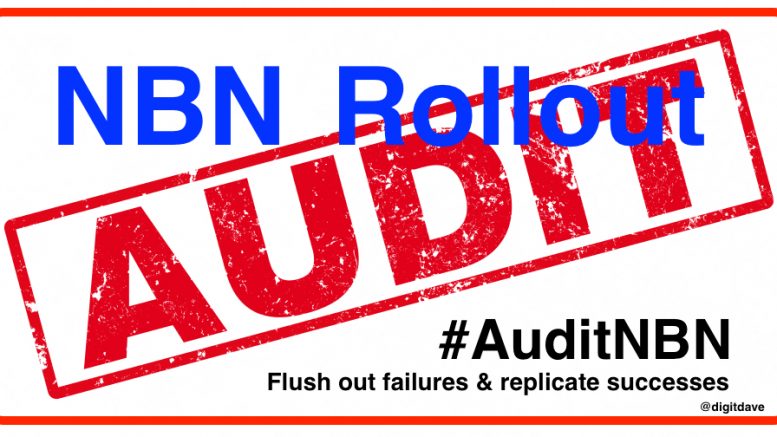 Regional businessman and past chair of the region’s Broadband Infrastructure Group, Mr David Abrahams, has called for a full audit of the NBN rollout on the Central Coast for the sake of the nation.

Mr Abrahams said he called on all federal election candidates to support his call for an audit. He said all business and community groups should support the audit and share their experiences, good or bad. “Regional, rural and outer metropolitan areas are crying out for clear solutions, solutions based on engineering experience,” Mr Abrahams said. “Naturally, I welcome the recent announcements by the ALP to return to a fi bre optic focus for the roll out,” he said. “However this can be best achieved if we learn from the situation today.

“It is also massively important to learn from the experiences on the ground. “The Central Coast is, in effect, the internet laboratory of the nation. “It’s crucial that we learn and apply these lessons, successes and failures. “An audit of the rollout would bring clarity to the list of successes, failures, delays, confusion, downgrades and cost issues. “This will give us a clear path to a better internet for all. “Perhaps it would allow us all to unite around the NBN project and defuse the battles.” Mr Abrahams, fresh from a private study tour of smart cities in northern Europe, has made the call for an audit in some desperation. “It is clearly apparent from around the world, that top notch telecommunication is vital to the prosperity of all regions,” he said. “As one of the chief organisers of the NBN investment in the Central Coast region, I feel a particular responsibility to maintain the goodwill of the project, now that it has become both a political football and an engineering nightmare.

“The delays we are seeing seem to be directly related to the radical change of technologies that was undertaken halfway through the rollout on the Central Coast. “There also seems to be confusion between the NBN Co and the t e l e c o m m u n i c a t i o n providers as to who is responsible for what. “Complaints fill the airways and column inches of media outlets as well as the massive complaint lists on social media. “Something needs to be done to make an awful situation better. “I’ve become a lightning rod in my community for issues and problems relating to the NBN rollout, due in part to my previous roles as chair of the region’s Broadband Infrastructure Group and Regional Development Australia.

“I am still a great believer in the NBN project and I am also aware of great success stories, though the project is under a great deal of pressure to improve its performance. “An audit here on the Central Coast will provide great dividends for the whole country.” According to Mr Abrahams, the NBN is being rolled out in many areas but it has reportedly been canned in other areas on the Central Coast and around the nation. Several business parks have been knocked off the fi bre rollout plans, Mr Abrahams said. “No clear answers can be given either on the type or timing of important rollout areas such as schools, clubs and business parks. “This is a major concern and ruins investor confi dence.

Joint Standing Committee on the NBN heard many tales of woe