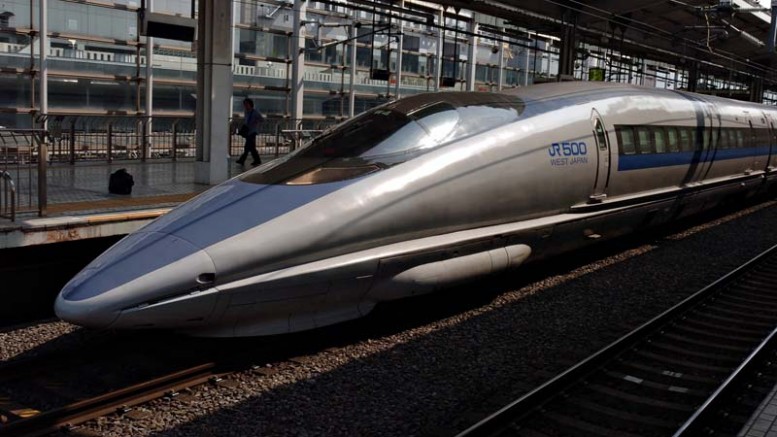 State and federal members of parliament as well as local federal election candidates will be asked by Gosford Council to confirm their party’s support for a high speed rail project between Sydney and Newcastle.

Cr Bob Ward moved a motion at the April 12 meeting of Gosford Council to highlight the need for high speed rail as an “issue of critical importance to the Central Coast”. Cr Ward said Prime Minister, Mr Malcolm Turnbull had spoken about high speed rail as part of his election platform. The ACT Government is calling for a Sydney- Canberra link but the Central Coast would be a much more viable service, Cr Ward said.

“The Hunter and Central Coast have a population of over one million compared to Canberra’s 400,000, he said. Cr Ward said it was important for council to campaign for the NSW Government to at least conserve a high speed rail corridor for a time when its development becomes more feasible. “Good access to jobs on the Central Coast is essential, our people spend too much time travelling out of the area to work. “It is vital for election candidates and current MPs to seek support from their parties for high speed rail to the Central Coast,” he said. Deputy mayor of Gosford, Cr Craig Doyle said he believed there was a “greater chance of Thomas the Tank Engine coming to Gosford.

“How the Central Coast manages to be so far down the pecking order here, in any comparison, defi es logic,” he said. Cr Doyle said taking one hour off the Coast to Sydney trip one way for 40,000 commuters would save 40,000 hours in the morning and another 40,000 in the afternoon, a total of 208 million hours saved in one working year. “If you were to give me two hours back every day to enjoy with my family I would take it.” Cr Chris Burke said he agreed that local residents and commuters deserved a fast rail service. “High speed rail will provide the opportunity for increased regional economic activity, including increased tourism, plus more businesses relocating and establishing locally as the Central Coast becomes more attractive from a rail travel perspective,” Cr Burke said.

Cr Vicki Scott said she did not believe the Central Coast had the population to sustain a fast train service. “Our area is small when compared to Western Sydney where there are two million people.” Cr Scott said council should also ask the NSW Government for a feasibility study for straightening the existing line so trains could travel at maximum speed. Cr Ward accepted an amendment to his motion from Cr Scott to incorporate the request to examine the potential to straighten the existing rail line. Cr Gabby Bowles opposed the amendment. “Why do we settle for fi bre to the node models of public infrastructure in this community? “I would have diffi culty aiming for expenditure of funds on something that is second best,” she said in relation to any proposal to straighten the existing line.

“I won’t support this motion as it stands… because I don’t think it is reasonable or visionary to support a second best fall back position. “We should be encouraging all levels of government to reach decades into the future to give the public and this country what they deserve,” Cr Bowles said. Cr Strickson said it was important to highlight the need to speed up freight rail, particularly to the north and south of Sydney. He said a fast train service for passengers would “open up freight lines which will take away delays on passenger lines so it is economically sound. “It really needs to be pointed out to the ministers that this is what is required and needed for this area,” Cr Strickson said. Cr Ward’s amended motion was carried with only Cr Gabby Bowles voting against.

David Leyonhjelm, Senator for the Liberal Democrats contacted Coast News saying: “While Very Fast Trains are great in theory, several studies have shown they are not economically viable in Australia. “Even before the inevitable cost blowouts, it is estimated that a Brisbane to Melbourne train would cost about $114 billion, or $5,000 per Australian. “This is too much money for private companies to raise without setting ridiculous ticket prices, and it would be unconscionable for the government to borrow even more money to fund it. “If governments really are worried about travel times, they should reform speed limits on our roads,” he said. “

Lifeguards on patrol from September 29

$68 million will not be enough to complete Cultural Precinct