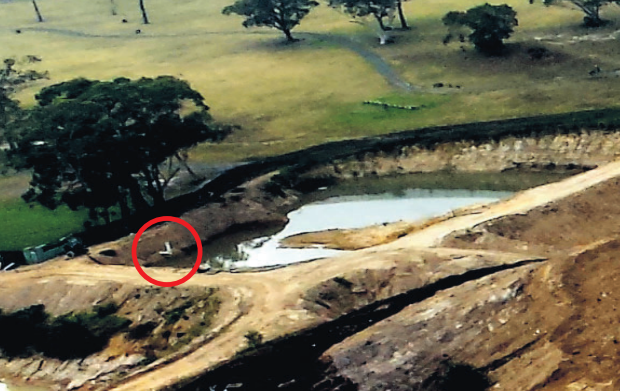 A leachate pond on the landfill site showing two exit pipes in the bank, upper one (left of middle) allegedly used for discharge

Coast community News also asked Central Coast’s Labor MPs whether or not they were prepared to publicly support the community’s calls for an independent inquiry. At the time of going to press we had not received a response. Mr MacDonald said he would “continue to take the advice of the responsible minister and the appropriate state agencies in the management of the Mangrove Mountain landfill.

“That advice is that the operator is compliant with its consent and conditions,” Mr MacDonald said. “We have an obligation to act on evidence and will continue to closely monitor the landfill,” he said. Mr Crouch also referred the matter back to the minister for the environment and heritage and assistant minister for planning, Mr Mark Speakman.

In a written statement, Mr Speakman said: “I am advised that the results from monitoring by water quality experts from the Office of Environment and Heritage have not shown any evidence to suggest the landfill is having a negative impact on the Ourimbah catchment water quality or stream health.

In response to a question as to whether the minister believed the EPA could be relied on to make a reasonable assessment of any possible threat to the Central Coast’s water supply posed by the landfill, given that the authority stands to make millions of dollars’ worth of fees associated with reinstating the landfill operator’s licence, Mr Speakman said, “Waste levies paid on waste deposited at the Mangrove Mountain site go into consolidated government revenue.”

He was also asked if he had received the 170- page submission from the Mountain Districts Association calling for an independent commission of inquiry into the landfill and he was asked to declare whether or not he would support the community’s calls for such an investigation.

Mr Speakman’s statement did not directly answer either of those two questions. Meanwhile, Dr Stephen Goodwin from the Mountain Districts Association called the EPA’s Environment Line to report a pollution incident on Tuesday, March 1.

“The complaint was about discharge from one of the sedimentation ponds on the Mangrove Mountain Waste Landfill site (EPL 11395),” Dr Goodwin said. “Discoloured water in this discharge was running downhill into the catchment of the Ourimbah Creek system and the Central Coast water supply and had been for some time,” he said.

“The discharge is an irrefutable fact and is a constant flow coming from the landfill site. “The most likely origin of the flow is from a sedimentation via two PVC pipes embedded in the pond wall in a strip of wall adjacent to the Mangrove Mountain golf course.

“Both pipes are set at a low level so that when the pond is fuller, as is the case presently, these pipes are not obvious. “To ascertain the location of these pipes would require a deliberate effort to access this area from within the site and they may not be visible even then, due to the turbidity of the water. “In relation to this matter, later on Tuesday, I was rung by an officer of the EPA who had attended the Mangrove Mountain Waste Landfill site during the day, regarding the details of my pollution complaint. “In the course of this I was asked to provide photographic evidence, which I did. “Earlier, I had been rung by Ms Jenny Lange, acting head of EPA Waste, Newcastle, to discuss essentially the same information.

“To date, my complaint made to the Environment Line and subsequent clarification and corroboration with these two officers has been verbal. “But I have since seen the response from the EPA to an investigative reporter for The Sun Herald, Ms Natalie O’Brien, and am extremely unhappy with what has all the hallmarks of a whitewash and lack of integrity.

“The statement that ‘No evidence of a siphon pipe or a discharge from a pipe was found by EPA officers’ beggars belief.” The EPA statement via Ms O’Brien was the second time within a week that the Mountain Districts Association was informed of outcomes from the EPA and Minister Speakman in relation to the landfill. The first was when Mr Speakman issued a statement to the Sun Herald that he would not be supporting the community’s calls for an independent inquiry.

“So now I am going to describe the incident in writing and I am requesting a written response. “On January 7, it was noted that a flow of sediment-laden water was exiting the side of one of the sedimentation ponds at the base of the wall and flowing down the golf course, back under the fence, and exiting the site beside the spillway in the NE corner and thence into the creek system.

“There was an irrigation controller located within one metre of the exit point. “This information was included with photos in our submission to the premier. “Evidence was found of two white pipes buried horizontally low in the bank of the pond.

“The pipe further west is the one of concern, and in line with the out-flow. “On January 17, following a severe storm, the area around the fence line was silted up. “On February 24 the exit point from the base of the same sedimentation pond had been opened up so that there was again murky water flowing strongly from there and into the creek via the same channel.

“Across the nearby path, a pipe in line with the discharge point had been excavated and a take-off installed, to which was attached a rubber garden hose. “It beggars belief that the EPA ‘investigators’, who had reportedly spent the whole day at the site, had not observed any of this, and managed to conclude that there was no evidence of a pipe or discharge from the landfill.

“Why did the EPA not dig back from the outlet to see if there was a pipe there? “Why did they not follow the pipe attached to the irrigation line back to see how it is related to the out-flow? “If the EPA wants to restore the trust of the community, this further episode of collective blindness is not going to do it.

“Cloudy water seemingly in breach of the 50 milligrams per litre of total suspended solids limit stipulated in Section L2.4 of the EPL 11395, dated May 3, 2012, has been constantly flowing out of this pond, probably for two years, since the pond was constructed.

“This pond does not just contain rainwater. “It has been observed receiving water from other ponds around it, including Cell W. “We remind the EPA of its own assertion that no runoff is permitted to leave the site.

“This latest incident is occurring at the same time as, and despite, the still unresolved EPA investigation into the ‘uncontrolled discharge’ from the NW corner of the regulated area into the catchment of Hallards Creek, which also flows into Ourimbah Creek and the Central Coast water supply.

“There is clearly evidence of a discharge from the sedimentation pond onto the golf course flowing downhill into the catchment. “There is evidence of pipes embedded in the pond wall. “Photographic evidence is provided of this,” Dr Goodwin said. Coast Community News has requested a response to Dr Goodwin’s allegations from the EPA.