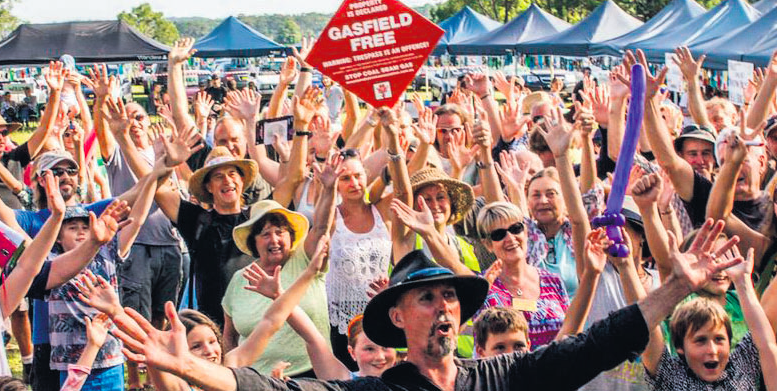 Local Greens, sitting Labor MPs and activists have been united in their condemnation of the NSW Government’s introduction of the Inclosed Lands, Crimes and Law Enforcement Legislation Amendment (Interference) Bill 2016.

Greens candidate for the federal seat of Robertson, Ms Hillary Morris said she was appalled at the NSW Government’s moves to penalise people trying to protect land and water from the threat of coal seam gas. “This has no benefit to police in terms of their ability to protect people from harm, since the law is already sufficient in that regard,” Ms Morris said. “This is purely a move by Baird to quell growing resistance to the continued actions of government which threaten our environment and our livelihoods,” she said.

“The people of NSW are saying no: no to new coal mines; no to CSG; and no to destroying our environment. “Rather than introducing new laws in an attempt to drown out their voices, how about the government starts listening to the people they are elected to represent?” “This goes against people’s democratic right to protest about actions undertaken that threaten our environment, negatively impact on agricultural areas or people’s amenity.”

According to Ms Morris, the Central Coast Greens have been active in supporting the community against the twin threats of coal and coal seam gas. While the CSG licence PEL2 was bought back, the Coast remains vulnerable to new CSG licenses, with our valuable farmland and water supplies at risk, Ms Morris said.

“Central Coast Greens supported the community based Gas-Field-Free survey, which revealed that 98.6 per cent of Mountain residents did not want CSG exploration or mining,” she said. “Over the last two years, Greens MP Jeremy Buckingham has introduced two bills to try to ban new coal and CSG mining in the water catchment, but sadly these have not been supported by the ALP.

“These new laws will not only be used against CSG protestors, who simply seek to protect land and water, but might be used against any protestors who exercise their right to stand up against recreational hunting, the sell-off of public assets including reserves in Gosford, and the like,” Ms Morris said. The legislation created an aggravated form of the existing offence of unlawful entry to inclosed lands, and increases the penalty from $500 to $5,500, if the trespass occurs on land where there is a business undertaking.