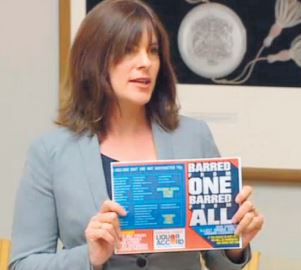 Federal member for Robertson, Ms Lucy Wicks MP announced to Parliament recently that the Brisbane Water Liquor Accord has extended its Barred from One, Barred from All program to target illicit drugs and violence around local licensed premises.

Ms Wicks said: “The change comes from the work of the Tackling Drugs and Alcohol Committee, which has developed a number of community-led strategies for the Central Coast.

“To ensure that the community is aware of this initiative, new artwork is on clear display now in pubs and clubs in my electorate. “There is a genuine confidence that these steps will complement and support the united front presented by the community and police towards antisocial behaviour and illicit drug activities on the Central Coast.

“I am advised that the accord has already resulted in venues being safer for patrons, staff and the community, so extending it to drugs and violence was voted on and passed unanimously by members of the liquor accord.

“This fantastic result demonstrates the hard work and diligence by those involved in the Tackling Drugs and Alcohol Committee in Robertson. “I commend committee member, Zane Tredway, licensee of the Central Coast Hotel and Secretary of the Brisbane Water Liquor Accord, for his work in this area.

“Committee member and Brisbane Water Local Area Command Superintendent, Danny Sullivan told me he is already seeing a very positive response to these measures in our community.

“The new poster has been viewed by around 3,000 people online already. “Another initiative that the committee is looking at is the Party Safe program, which we would like to be able to support and extend.

“This program will target 15 to 18 year olds and focus on alcohol, drugs and mental health. “It is called ‘Building a Better Tomorrow’ and involves a series of community forums.

“These forums will help reach parents and students and will encourage access to support groups, hotlines, online support and drop-in centres. “This has been a tremendous community effort of which the Central Coast can be proud,” Ms Wicks