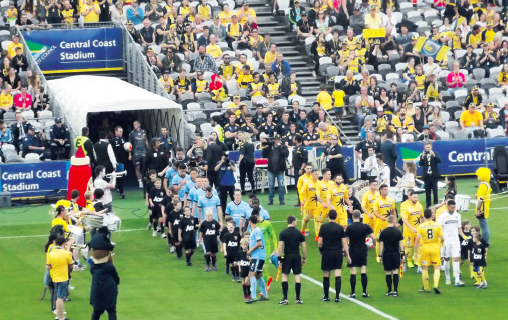 A gutsy 10-man Central Coast Mariners fell 3 to 1 to Sydney FC in their home game on Saturday, October 31 after losing Nick Fitzgerald to his second yellow card in the 42nd minute.

Smeltz’s opener was followed up by a scintillating run by Ferreira down the right to set up O’Donovan and close the defi cit. Nick Fitzgerald then found himself on the wrong side of two referee decisions where he was shown two yellow cards (at the 40th and 42nd minute) that saw him leave the fi eld just before the break.

Despite two goals and a red card, the biggest talking point of the fi rst 45 minutes was a penalty shout that denied O’Donovan his brace. The Irishman picked up a superb long ball by Liam Rose before being halted by a diving Sydney goal keeper, Janjetovic in the penalty area.

Mariners’ fans and players alike were begging for a penalty that was waved away by Adam Fielding. One larrikin in the crowd was heard to say: “You’re missing a great game ref”. With only 10 men on the pitch, the Mariners continued to push forward and stayed true to their high pressing approach for the full 90 minutes, which was evident when Walmsley made an attacking substitution at half time (Austin for L Rose).

Matt Simon closed the match out with two goals in the final 10 minutes of play to gift Sydney FC all three points. Full focus now turns to the next match where the Mariners’ will play Wellington Phoenix in their second consecutive home match. “3-1 it’s not a great result, but there were elements of the performance where we showed progress tonight,” coach Walmsley said after the match “I’d like to say up front, Fitzgerald’s one of the most honest players I’ve worked with and he doesn’t dive,” he said.

“There was a period of time there in between the yellow card, the red card and the penalty shout where it was like, what are we watching here? and it was a little bit unusual to say the least. “But we have to look at what we did and what we didn’t do and take that into the next game. “There were some positives tonight, we weren’t as open at the back until we were stretched in the last 10 or 15 minutes and we still created some problems.

“I think people would’ve looked at our recent performances and said we were a little unstructured, the way we go forward a little bit cavalier. “We can be open to those sorts of comments aimed at our way. “At half time it defi nitely felt like we could hang on and nick something where we thought we could get a chance. “They brought Simo on, they had two centre forwards, and they almost had four up front at times.

“It was going to be a handful and there are areas where we need to get better so we’ll continue to work on them. “Simo’s a great guy, a great character and he’s proved he’s good for Sydney FC tonight off the bench, so you’ve gotta take your hat off. “We want to see goals like that at this stadium,

I’d much rather they be ours and in future games, I’m sure they will be. “Bring on Wellington next week for the Pink Day, we’re going to have a real crack at them. “I’m proud of the boys for the shift they put in, you know down to 10 men. “At half time we reset, frustrated them for a little while, could’ve got something on the break but after the second goal it was difficult to push on.”