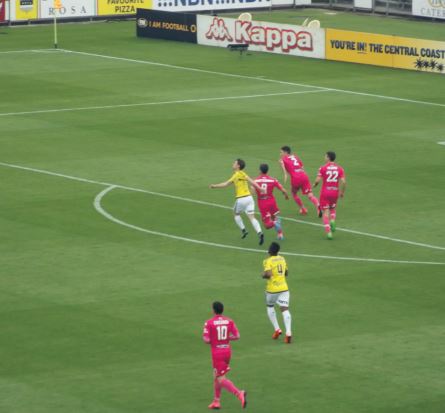 The Walmsley entertainment spectacular was attended by 6,460 fans, down from the over 8,000 that attended the season opener against Perth.

The Mariners dominated most of the match, which was an important one for the Phoenix to win as they publicly announced they would fight for their right to remain in the A-League.

Despite their commanding performance, the Mariners ended up sharing the points with Wellington as the full-time score was one all.

Roly Bonevacia, Wellington’s number four, was given a yellow card for his tackle on Fabio Ferreira on the half way line in the opening minutes.

Former Mariner, Michael McGlinchey, opened the scoring eight minutes into the first half, built from the assistance of an accurate cross from Krishna to McGlinchey’s feet in the box.

Even though the score remained 0 to 1 until half time, the Mariners held 60 per cent of the possession, playing high with next-tono defenders staying back to help keeper Izzo ward off some swift counter attacks from Wellington.

Just before the 20th minute, Mitch Austin’s speed got him into a great spot behind the Wellington defence to cross to O’Donovan who just could not get to the ball. Caceres took a punt next from outside the 18-yardbox, but that was too wide.

Phoenix keeper Glenn Moss stopped a shot from Fabio Ferreira at the 22nd minute. As the rain started bucketing down, Roy O’Donovan’s equalizing goal at the 30 minute mark was clearly offside and Mr Moss managed to get his hand to a strike by Rose five minutes before half time.

The home side went to the change rooms at half time one goal down. First-half highlights for the home side were the strong partnership between Storm Roux and Fabio Ferreira resulting in some lively wide attacking play.

Roy O Donovan also managed to get himself into good spots throughout the first 45 minutes but the Wellington Phoenix looked rather dangerous on the counter at times as the Mariner’s focus on attack left them regularly vulnerable at the back. The defensive highlight of the game for the Mariners was an excellent Izzo save 59 minutes in, when Bonevacia lined up a strike that was met with a notable Izzo dive and finger-tip defl ection.

One of many Mariner’s corners gave Jake McGing an opportunity to score with a header but strong defensive work from Phoenix’s Justin Gully kept him out. Minutes later McGing fired again but was wide of his mark.

A Josh Rose cross gave Ferreira his best chance in the second half but he too was off target. An O’Donovan header at the 76th minute was the striker’s third goal for the Mariners in three home games.

The entertainment kept coming in the closing minutes of the match with near misses from Heffernan, Ferreira and McGing. Unfortunately, the entertainment didn’t result in winning goals for the Mariners.

The young Joshua Bingham made his first home appearance for the Mariners as a second-half sub and showed promise. The match stats give an interesting insight into how the game was played.

Mariners took 15 corners compared with two for the Phoenix. The home side had 17 shots to the Phoenix’s eight.

“I haven’t seen the official stats but I think we got the ball in the box 40 times or so, that’s what we’re about,” said coach Walmsley after the match. “We knew what threat they were on the counter attack, we knew what threat they are in general play, their ability for McGlinchey and Bonevacia to get into pockets.

“We knew that if we could squeeze them and restrict their space, that we could stop the majority of their threat,” he said. “Of course if you give the ball to them early in the game and they score off it, it allows coach Ernie Merrick, who’s an astute tactician, to set his stall onto hold onto to that and make life difficult for us.

“You could see the amount of work that Ferreira and Austin did up the line, Ferreira has a hamstring niggle which is the most disappointing part of today, but credit to him for getting that many crosses in.

“I’ve got incredible belief, we’re a side in the making and we are relishing the freedom that we’ve got to go and attack teams.

“There will be a day where we convert far more and the belief will grow into the next game and if we can use that performance as a platform to go to the Jets and get a result away from home, which will be the first time in a long time, then that will do wonders for us and there’s a lot of belief that we can do that.”