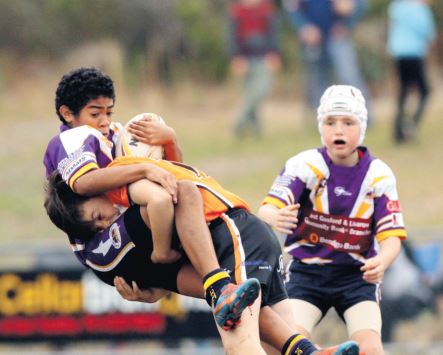 The Storm’s U13(2)s and U11(2)s scored impressive victories, while the U12(3)s fell to the Tigers. Gosford started tentatively in their U13(2) s qualifying semi-final against Blue Haven, finding themselves 10 behind after as many minutes.

Three rapid fire tries down the left edge however enabled the Storm to nudge ahead 14-10 at the break.

The pick of these first half attacking forays saw the Eilersen twins; Taylor and Jordan combine in a crisp interchange of passes down the western touchline.

The Raiders struck first after the interval to lock the scores back up, before Gosford assumed total control, racing away to win 32-14. Two tries to busy half/ lock Nick Rodrigues sealed the victory after the long striding Sebastian Burke had pushed the Storm ahead with a determined 40 metre charge to the line.

Sebastian’s try was particularly well received as he has only just returned to the side having missed the previous three months with a knee injury. Gosford will now play unbeaten minor premiers Ourimbah in the major semi final.

Patches of sparkling attack underpinned by gritty on line defence enabled the Storm’s U11(2)s to ward off the Wyong challenge, winning 20-18 in a high quality elimination semi final.

Gosford led 10-6 at half time, courtesy of a long distance effort from Jeremy Hendriksen and an unorthodox, reverse pirouette try to Tyson Pagacs in the right corner.

While the Storm were never headed throughout the contest, Wyong continued to threaten and it was only desperate defence, combined with further tries to centre, Tevita Vaenuku and a second to dummy half Tyson Pagacs, that won them the day.

In a tremendous all team effort, the front line tackling of Dylan Gale, Ryan Bird and Callum Skuse was particularly worthy of note. Gosford’s lone, downcast chapter of the weekend arrived when The Entrance proved too strong in the U12(3)s qualifying semi final, running out 20-4 winners in drizzly conditions.

The physical Tigers outfit hustled and bustled Gosford off their customary free flowing game and fully deserved the comprehensive victory.

Gosford forward Jake Martin scored a powerful second half try and was his team’s most damaging runner throughout the contest, while prop Josh Stedman and fullback Michael Porter were also prominent.

The Storm boys will now need to regroup in preparation for the knock out semi final against the Budgewoi Buff Point Bulldogs.