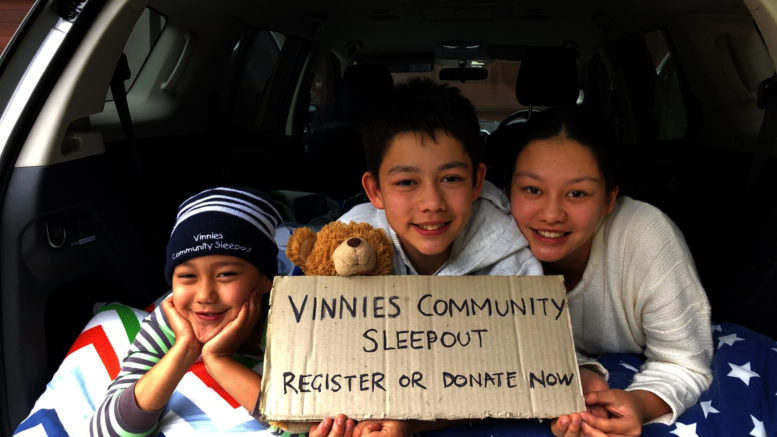 The St Vincent de Paul Society NSW is calling on the Central Coast community to take action during Homelessness Week by signing up and fundraising as part of the NSW Vinnies Community Sleepout taking place on Friday, August 19.

Participants will sleep out at Our Lady of the Rosary Catholic Primary School, Wyoming on the same night as communities from across the state, with all funds raised remaining in the local area to support programs and services operated by the Society.

The call to get involved in the NSW Vinnies Community Sleepout is one action residents can take during Homelessness Week, August 1 to 7, in order to raise awareness of strategies to address housing availability and affordability over the long term.

CEO of St Vincent de Paul Society NSW, Jack de Groot, said this year’s theme for Homelessness Week was to End Homelessness, We Need a Plan which tied in with what they hoped to achieve with the community sleepout.

“We want to give participants greater understanding of the challenges faced by people at risk of homelessness and hardship and encourage them to use that knowledge to take action,” he said.

“The cost of housing is a huge concern at the moment, particularly in regional areas, so we would like to see a long-term approach that is well informed in order to address the issue.

“The Society recently commissioned research conducted by the University of NSW Centre for Social Impact that revealed government investment to build 5,000 new social housing properties each year for the next decade would reduce the current waitlist by 75 percent.

“Investment in social housing is one way to the vastly improve the conditions for thousands of people doing it tough right now.”

Figures recorded by the Society revealed 2,500 people sought assistance from Vinnies members across the Central Coast over the past year with 89 percent seeking support due to a shortage of food and 57 percent experiencing housing stress.

“The sleepout is only one night but it has the capacity to bring about change over a much longer period,” he said.

Funds raised from the night at Wyoming will remain in the Central Coast community to assist Vinnies Support Centres in Gosford, Woy Woy and Wyong, which provide financial and material aid to locals in need.

Last year, 12 Central Coast teams participated in the Vinnies Community Sleepout and collected  $24,604 to raise awareness of homelessness and to support those people sleeping rough.

People can register to take part and donate at www.vinnies.org.au/communitysleepout