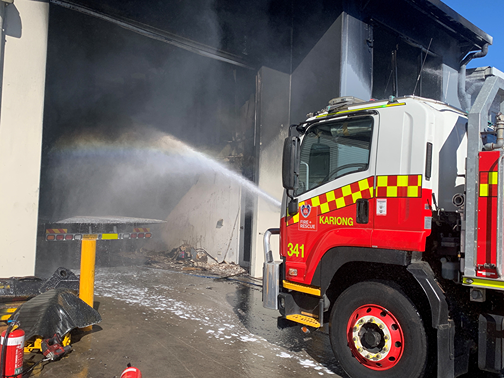 Fire and Rescue NSW (FRNSW) crews were called to the scene of a factory fire on Wisemans Ferry Road, Somersby at 9am on Tuesday, August 2.

Approximately 20 fire trucks and 80 firefighters rushed to the scene, with FRNSW crews supported by the NSW Rural Fire Service.

The factory was believed to contain flammable gases and approximately 1,000 litres of diesel.

Multiple explosions were reported and around 40 neighbouring businesses were evacuated.

One person was treated by NSW Ambulance paramedics for smoke inhalation and burns and taken to hospital.

FRNSW said it was difficult to extinguish the fire as it had proven difficult to gain safe access to the scene.

HAZMAT crews were also on site to monitor water run-off into streams.