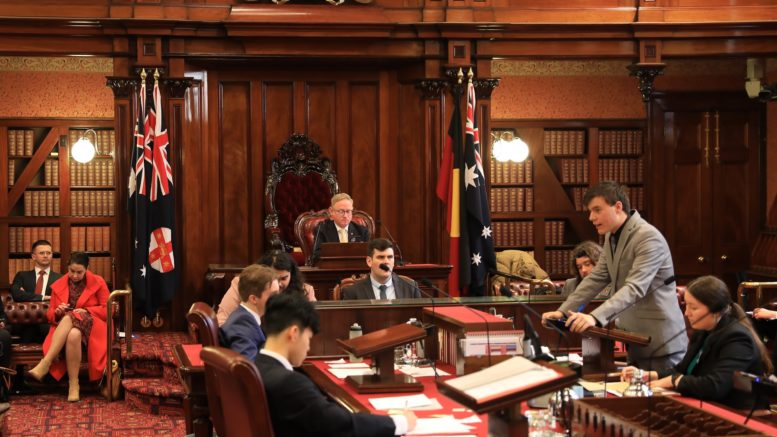 Inspired young people from the Central Coast have returned to their communities and motivated to influence change after completing a memorable 20th anniversary of the Y NSW Youth Parliament.

Wyong’s Jayden Delbridge and Janine Southwell, from Terrigal, were among 60 students who ‘took over’ the Legislative Council for a four-day Sitting Week (11-14 July) in the Parliament of NSW, as part of the year-long youth leadership and engagement program.

Students debated and passed nine important committee reports, including nearly 100 recommendations, across a range of portfolios including Aboriginal Affairs, Education, Women’s Affairs and Inclusion and Diversity.

HSC student Delbridge said it was incredible to debate in the oldest house of review after the 2021 program was delivered virtually because of the pandemic.

“You don’t really get the true experience until you are actually in the chamber where you can live like a real politician and I think that is at the core of the program,” said Delbridge, who was a member of the Education Committee.

“We can have a bit of theatrics and bit of fun but at the core of it we actually really care about the issues that we debate and we really do want to make a change.”

Delbridge was elected Leader of the Opposition in the Upper House and said the position enabled him to see first-hand the passion of young people.

“It was so inspiring to see how many young people really care, and that our future is in good hands,” the 17-year-old said.

Delbridge plans to study a Diploma of Community Services next saying the Youth Parliament had re-ignited his passion for advocacy on the Central Coast.

“It’s really re-sparked my drive and brought me back to why I advocate and that’s to give a voice to those who don’t have a voice,” said Delbridge.

“I think it allows you to speak up about something you are passionate about and it brings you together with other passionate people who will push you and who will be there to support you as you develop your own ideas and improve your own confidence to stand up in open floor and get your opinion out there,’ said Southwell, who sat on the Transport and Infrastructure Committee.

“I know on the first day, I didn’t stand up in open floor at all but on the last day I stood up in nearly every debate because I felt confident I could say something and something that will make a difference.”

Member for Seven Hills Myles Waciega was announced as the 2023 Youth Governor at the closing ceremony at Parliament House on Friday 15 July.

“I am truly honoured to be your Youth Governor for next year and I can’t wait to be further involved in the Y and Youth Parliament,” said Waciega, the Shadow Minister for Aboriginal Affairs in 2022.

“This is one of the defining moments of my life; this event, the friends I’ve made, you have all been wonderful.”

“Each year we are overwhelmed by the passion and commitment young people bring to the program and this year was no exception.”

Participants came from all parts of NSW and camped at the Sydney Olympic Park Lodge for nine days, taking a bus into Macquarie Street each of the four sitting days.

More than a dozen Members of Parliament made time in their busy schedules to chair debates, Question Time, and Matters of Public Importance, offering invaluable advice and encouragement.

This year marked the first-time participants were able to meet in person for two years, with COVID-19 restrictions turning parliamentary training and sitting days into a virtual program.