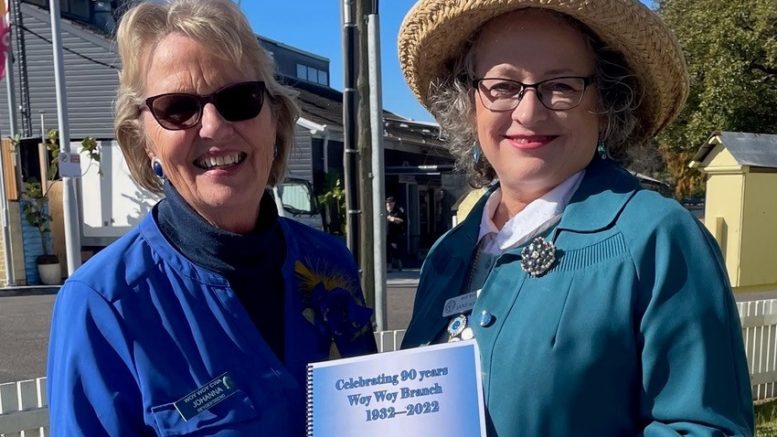 Woy Woy CWA has celebrated its 90th birthday in style with a 1930s themed morning tea in the grounds of the hall and is offering a book on the history of the branch for sale.

On June 8, 1932, Mrs Florence Staples formed the Woy Woy branch of the Country Women’s Association (CWA) of NSW, running the organisation from her home and laying the groundwork for what the branch has become today.

She was the wife of a sitting Councillor and the first meeting was attended by 16 women with Mrs Staples nominated as the first president.

The official opening, on December 1, was attended by 67 members.

In the early years, meetings were held in the supper room the local cinema and later in the lounge of the Bayview Hotel or The Thistle Café on The Boulevarde.

For a time after these rooms became unavailable, members met in the home of a member until the present hall on The Boulevarde was opened on December 11, 1940.

From the beginning, the priority community project of the branch was to open a baby health centre and members worked hard to raise funds.

The first clinic was opened in 1932 in an old house and Sister Lampe took up duties as baby clinic nurse.

Only nine babies were enrolled but by June, 1975, the centre had 347 baby visits.

It was free to any woman and child living in or visiting the district, and also offered free ante-natal care classes.

The baby health centre relocated to the new hall when it was opened in 1940.

The hall has undergone many renovations over the years, with the baby health centre closed by the Department of Health in 1978.

Since then the branch has continued to help many community groups with its diverse membership enjoying such pursuits as baking, handicrafts and research projects.

“The Woy Woy CWA has been a constant presence on the Peninsula since 1932,” branch president, Jane Bowtell said.

“In recent years we have gone from strength to strength and currently have almost 60 members who continue to help the branch grow and remain relevant in 2022.

“Whilst this was a celebration to honour and remember our founding president, Mrs Staples, and her band of merry women and all that they achieved it was also a time to understand that whilst we honour them and our past we must remain active 90 years later by embracing current community needs and future expectations.”

In honour of the anniversary, branch historian, Johanna Reygersberg, compiled a book on the history of Woy Woy CWA, which she presented to Bowtell at the anniversary celebration.

“I felt a compulsion to write something about our branch,” Reygersberg said.

“I wanted to present a combination of photos and heritage information and started on it about two years ago.

“I began by compiling information, minute books and pictures and although it was put on the back burner for a few months while I worked on another project, I was determined to have it finished for the anniversary celebration.

“The month before, I had no social life – I spent every day checking, editing and finishing it off.”

Bowtell said the book would make a wonderful gift for a Woy Woy lover or local.