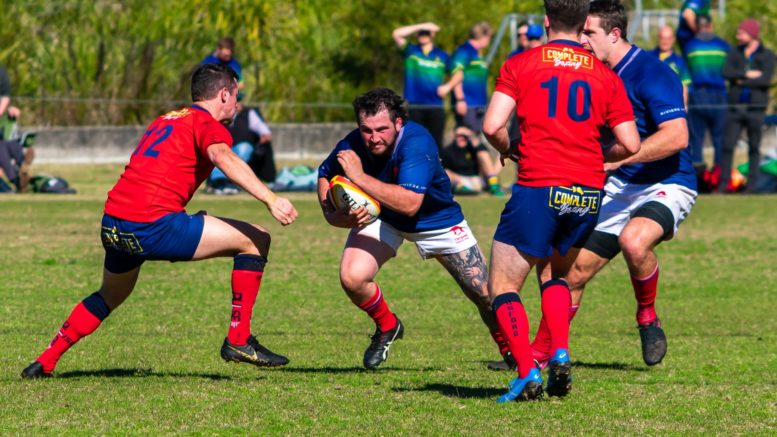 Terrigal defeated Gosford in the first match of the day

Soggy conditions on June 9 saw three Premier 1 matches played back to back at Woongarrah Oval, resulting in wins for Terrigal, Avoca Beach and competition leaders Kariong.

The first match, kicking off at 12.30 pm, saw the Terrigal Trojans defeat Gosford 26-8.

The first half saw Terrigal in attack, but great Gosford defence kept the Trojans to just one converted try in the first half before Terrigal piled on three second half tries to Gosford’s one.

Three of the Trojans four tries scored by Blake Irwin.

Gosford gave one of its best performances of the year, despite the loss, built upon the work of centre Sam Underwood, who crossed for the team’s lone try, flanker Richard Cully and winger Michael Jones.

In the second match, Avoca Beach accounted for the Razorbacks 41-29.

Avoca Beach started off well and controlled much of the proceedings in the first 40 minutes, leading by 28-3 at half-time.

In the second half the Razorbacks outscored Avoca Beach by 26-10 but Avoca held on for the win.

Best players for Avoca Beach were hooker Cooper Elliott, flanker Fionn Henderson-Foley, winger Shawn Townsend, who crossed for three tries, and winger Liam Jenkins while the Razorbacks were best served by fullback Edan Serone, No.8 Rob Peden and Josh Holman, in his return to rugby.

The final match on the day at 3.30pm saw Kariong continue its great recent form to defeat Hornsby 36-17.

The match was an even affair for the first half with Kariong going into the halftime break leading by a narrow 17-12.

The further the match went on however, the more Kariong was able to take control on the paddock and on the scoreboard.

Kariong scored six tries to Hornsby’s three to take the match and maintain its lead at the top of the competition ladder.

Kariong had several good players but none were better than centre Kane Williams, flanker Lachlan Peruch and lock Taylor Mildren.

Best for Hornsby were No.8 Talifolau Sitani, hooker Hosea Fotukava, who crossed for two individual tries, and centre Samuela Kanongataa.

The points ladder sees Kariong hold onto top spot on 37, closely followed by Terrigal on 36 and Avoca Beach on 35.

All lower grade fixtures, and the Women’s 10’s matches, were cancelled.