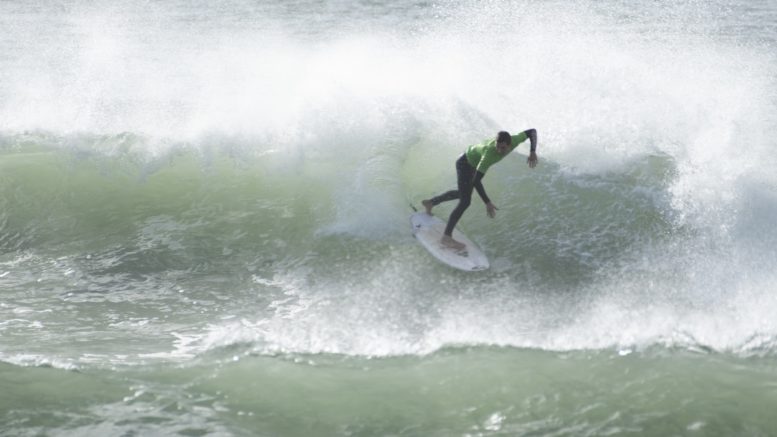 Lennox Chell in action in the Pro Junior Boys final

Avoca surfer Lennox Chell narrowly missed out on taking out the Pro Junior Boys title at the 2022 Skullcandy Oz Grom Open, coming a close second to Long Reef’s Kobi Clements after leading for much of the final.

The six-day event ran from July 7-12 July and comprised a World Surf League (WSL) sanctioned Pro Junior Qualifying Series (JQS) event and an elite competition for promising grommets in the Under 14, 16 and 18 divisions.

While Chell sat in the lead for much of the final, Clements capitalised on the momentum he showed in the earlier rounds of competition to leapfrog Chell.

“I would have loved to get the win but am still very happy with second place,” he said.

“I haven’t had a good year – this is my best result so far.”

Chell, who belongs to the Avoca Beach Boardriders, has been riding boards since he was about three years old, with both of his parents keen surfers.

“I’ve been competing since I was about eight – pretty much my whole life,” he said.

Not sure of his future plans, Chell said he was definitely hoping for a career as a professional surfer.

“I hope to compete in a WSL competition later in the year.”

Chell competes in around nine events for the Avoca Beach Boardriders each year and hopes to return overseas later this year to once more try out the surfing action.

“Before COVID I did a lot of trips and have surfed in Indonesia, Hawaii, Fiji, Europe and South Africa,” he said.

“The biggest waves are definitely in Hawaii.”

The Skullcandy Oz Grom Open, presented by Vissla, concluded on July 12 after five days of competition at Lennox Head.

The Grommet competition has produced such surfing champions as the Coast’s own Macy Callaghan.

“As a grommet the Skullcandy event was one of the best events of the year and one that every single surfer aspired to win,” the former World Championship Tour surfer and Skullcandy Oz Grom Champion said.

“The event always attracted some of the biggest names in international junior surfing and it gave us a solid indication of where the benchmark of performance was across the globe.”