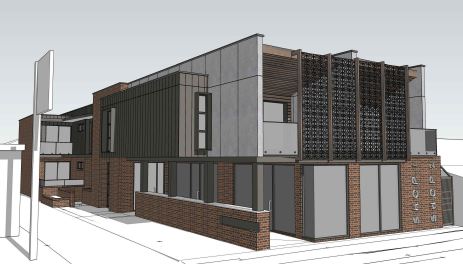 An artist’s impression of the revised Toukley development

The owners of a vacant block at 139 Main Rd, Toukley, have drafted revised plans for shop-top housing, following refusal of a previous development application (DA) in February 2021.

Both Central Coast Council and the Local Planning Panel rejected the previous DA for a three-storey building comprising two retail premises and nine residential units, mainly because of its bulk and height.

That DA was strongly opposed by the local community, and the revised plans are now open for public consultation until July 29.

All units will be offered as Specialist Disability Accommodation, with two as affordable rental housing, under a 15-year commercial management agreement with registered housing provider Independent Living Villages.

It is envisaged that the units would be subdivided under Strata Title at the end of the 15-year agreement.

A Statement of Environmental Effects (SEE) says that the revised development would be consistent with the scale and form of other mixed use commercial/residential buildings in the neighbourhood.

The report says that as Toukley transitions from low-scale to multi-level medium density residential uses, some development sites along Main Rd are incorporating commercial premises at ground level.

A traffic assessment concluded that the low volume of traffic from this new proposal would have minimal impact, because the traffic lights at Dunleigh St creates gaps in Main Rd traffic flow to adequately cater for in/out vehicular movement, as occurs on numerous driveways along Main Rd.

One of the reasons for previous refusal was the lack of a management plan for potential or actual acid sulphate soil or contaminated land.

The site has been vacant for many years after demolition of an old house and more recently used as an unofficial unpaved car park.

It is adjacent to a site now used as a car washing business that was once a service station and there is a risk of aged migrated contaminants from underground petroleum storage tanks.

Sampling taken as part of an environmental site assessment detected asbestos and hydrocarbons, therefore, remediation and site validation are required to make the site suitable for the proposed use.

There also is potential that the site contains acid sulphate soil which would require treatment.

The applicant has submitted a Remediation Action Plan including excavation for basement parking and offsite disposal of the contaminated layer located in the soil up to one metre below ground level.

According to Council there are no other contamination concerns that would prevent the site from being developed, subject to instigation of the Remediation Action Plan and appropriate validation by a suitably qualified contaminated land professional.

Submissions on the revised DA-1739 will be received by Central Coast Council until July 29.