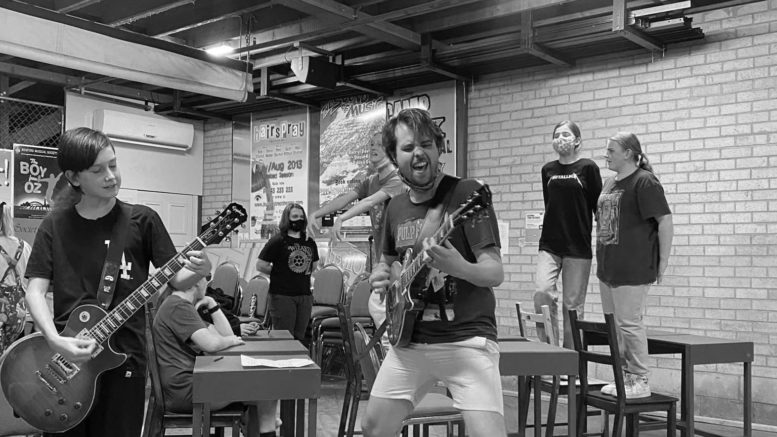 School of Rock cast having fun and working hard at rehearsals, getting ready for opening night on July 29.

Central Coast residents are invited to rock out at the Laycock Street Community Theatre as the production of School of Rock The Musical hits the stage on July 29, showcasing a cast of kids shredding guitars, pounding drums and rocking out live.

Presented by the Gosford Musical Society, School of Rock is based on the 2003 hit film starring Jack Black, following the story of a wannabe rock star, Dewey Finn, as he turns a class of students into a riff-scorching, all-conquering rock band.

Director Rosie Ross said the production would be a treat for all ages showcasing how music unites and encourages inner superstars to shine.

“School of Rock encourages self-discovery through the power of live music, which resonates with me; I find myself getting lost in an eclectic range of music, connecting to different sounds that match my mood,” Ross said.

“I also love directing musicals and dramatic performers, and this piece of theatre not only encompasses the usual singing, dancing and acting associated with a musical but allows me to work incredibly close with my husband and musical director, Ben Ross.

“The show incorporates performers from ages nine to 70, with some of the youngest performers playing instruments live on stage!”

Opening night is Friday, July 29 and will remain at Laycock Community Theatre until Saturday, August 13, with multiple dates and times available for everyone to catch the show that’s hitting all the right notes.

Ross said the production would feature all original songs from the film, plus some brand new ones by Andrew Lloyd Webber, with musical direction by Ben Ross and choreographed by Rayelle Robyn.

“Due to COVID, we have been paused with rehearsals several times and have seen many of our wonderful cast and production team struck down at various points,” Ross said.

“Now, at the pointy end of rehearsals, we are hoping that this latest COVID wave won’t have too heavy of an impact.

“The whole team, cast, crew and production are very excited to have an audience to perform in front of; this audio-visual spectacular, along with the truly heartfelt story, is one for all ages.”

For more information or to purchase tickets to School of Rock The Musical, visit coastboxoffice.com.