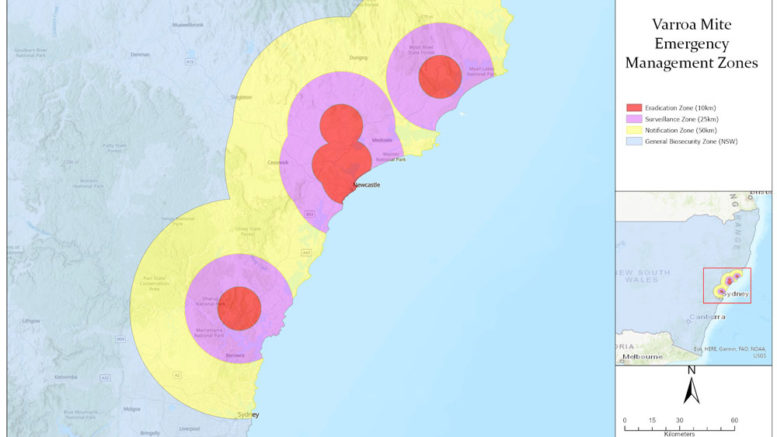 The NSW Department of Primary Industries has confirmed it has identified loads of bees at Calga connected to the recent detection of the varroa mite in Newcastle Port.

These Central Coast loads have now been assessed for the presence of Varroa and one load of 120 hives near Calga has been inspected and 4 mites in 120 alcohol wash samples have been identified.

This load has now become a new Infected Premise (IP) and has initiated a new delimiting survey and emergency zone.

“Since Varroa mite was first identified at the Port of Newcastle last week, NSW DPI has been working with apiary industry bodies and stakeholders to ensure beekeepers are informed and empowered to be part of this critical response,” Anderson said.

“So far many of the infested premises have been located very close together so the emergency zones covered largely the same areas but recent detections at Bulahdelah and Calga have expanded the area covered.

“This detection like others outside the 50km zone, is connected to the single commercial operation and authorities are still confident they can still eradicate the mite.”

Feral honeybee hives will be eradicated from the eradication and surveillance zones.

Tracing activities are continuing and the operations are ramping up with interstate department counterparts arriving to assist in the emergency management team response.

Beekeeper volunteers are being mobilized to assist in the surveillance efforts.

A statewide stand still order is still in place and the Australian Honey Bee Industry Council is working with the industry to ensure the standstill order is in place for as short a time as possible.

Beekeepers within 50 km of infested premises must notify NSW DPI of the location of all bees by calling the Exotic Plant Pest Hotline, 1800 084 881 or by visiting www.dpi.nsw.gov.au/varroa,