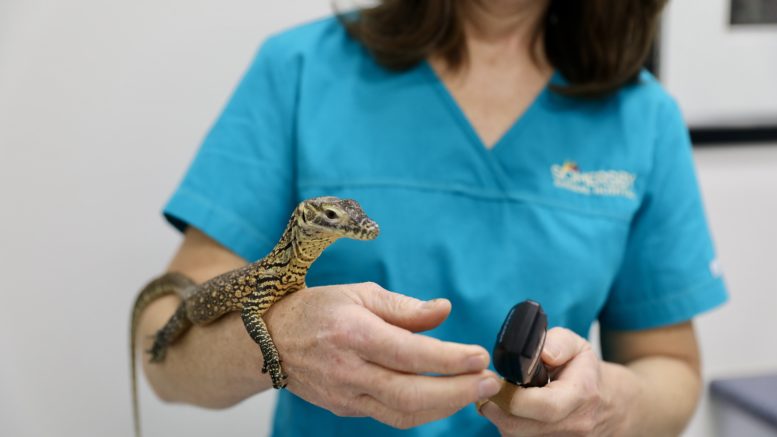 One of the baby Komodo dragons getting its health check

The lizards hatched at the Australian Reptile Park in April – the first time the species has ever hatched in Australia – and Daenerys and all three babies were deemed to be very healthy and happy.

The vet visit for Daenerys included weighing the “Mother of Dragons” as well as an ultrasound to check in on her reproductive health post-laying of her first successful clutch of eggs.

The three-month-old babies also underwent weighing and measuring, as well as X-rays and a check of their overall condition.

Daenerys came in at 23.5kg in weight which is a great result for the 10-year-old dragon.

The health check saw that she had maintained a healthy weight after laying her clutch.

Her ultrasound revealed small follicular development and that all was well with her reproductive health.

The three babies each weighed between 142 and 150g and measured around 45cm in length – an excellent indicator of health which sees them on track to weigh around 1kg when they reach the age of 12 months.

The health checks proved to be more challenging for the vet than checking anaverage dog or cat.

Weighing the world’s largest lizard species is no easy feat.

The Australian Reptile Park engaged the help of Somersby Animal Hospital to weigh Daenerys on its giant scales and local vet, Dr Robin Crisman, was on hand to give them a look over and ensure they are in good health.

The April hatching marked an Australian first as no other zoo, sanctuary or facility had successfully bred Komodo dragons in the country.

“Yearly health checks are critical for our Komodo dragons – as they are reptiles, they don’t actually need to eat that often, so it’s not like they just stop eating when they feel sick,” he said.

“The best way of ensuring their good health is by weighing them and having the vet complete annual look overs.

“Daenerys and her babies are some of my absolute favourite animals here at the Australian Reptile Park, but it’s not always an easy task getting them to the vet’s.

“A lot of work goes into the breeding of Komodo dragons.

“These are animals that could potentially kill each other and do some serious damage to us keepers in the process.

“It was a bit touch and go during the initial introductions, however our female became receptive and the two mated successfully which led to the hatching of our three perfect baby dragons.”

Visitors can see all three baby Komodo dragons in the Lost World of Reptiles exhibit and their parents Kraken and Daenerys in the Komodo dragon exhibit.

The Komodo Dragon is the world’s largest lizard and can grow up to 3-4 metres in length and weigh over 100kg.

Found on the Indonesian island of Komodo, there is a stable population of about 3,000 to 5,000 Komodo dragons in the wild.

The Komodo dragon is a monitor but its forked tongue gives it a dragon-like appearance.

They are carnivorous predators but will eat just about anything.

The status of the Komodo dragon in the wild is Vulnerable, which is the status level before endangered, on the IUCN red list.

Their numbers are declining because of human encroachment, poaching, natural disasters and a shortage of egg laying females.