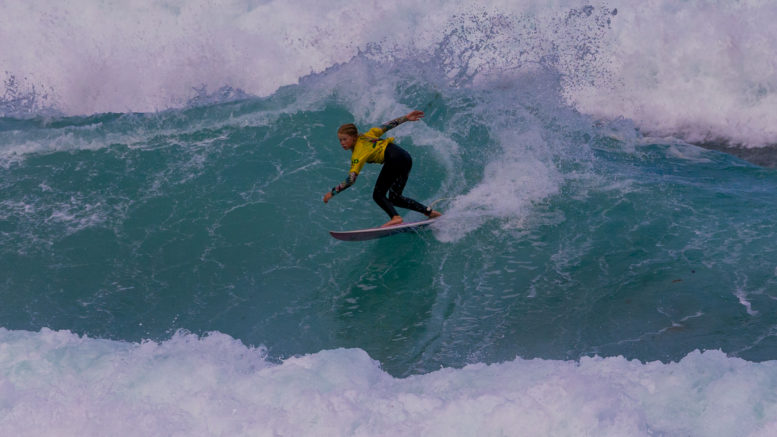 An Avoca Beach local has been crowned champion in the Under 12’s NSW Grommet State Titles at Maroubra Beach on July 25, with her wave choice and ability to perform excellent manoeuvres heat after heat impressing the judges.

Talia Tebb first competed in the Under 12’s Grommet State Titles as an eight-year-old, making the semi-finals, but last Sunday was the day she claimed her first State Title finishing with a 12.5 total.

The 11-year-old has already had an exceptional year in competitive events after taking out the Billabong Occy Grom Competition earlier this month.

“It feels amazing to win the State Titles … it was a tough couple of days, but I just went out there and knew I needed to attack the wave, reset and get back out and do it again,” Talia said.

“It was tough through the shore break paddling out, it was about timing, but I did it and was so happy to get to the final.

“I was nervous at the start of the final, and I was seven minutes in before I got my first wave.

“As soon as I got the first wave on the board, I was relieved but knew it wasn’t over till the final buzzer.”

The Under 12’s Boys Champion was Avalon Beach local, Locana Cullen, who took out the highest wave of the day each day, with the judges awarding him near-perfect 9-point waves.

The 2022 Havaianas NSW Grommet State Titles finished on July 25 with the Under 14’s.

The NSW Grommet Surfing Titles is a junior sport pathway event with entries and seeding drawn from the NSW Regional Titles held within the 11 regional areas, as well as the rankings from the Occy Grom Comp and Billabong Oz Grom Cup earlier in the year.

Be the first to comment on "Avoca grommy crowned NSW champion"