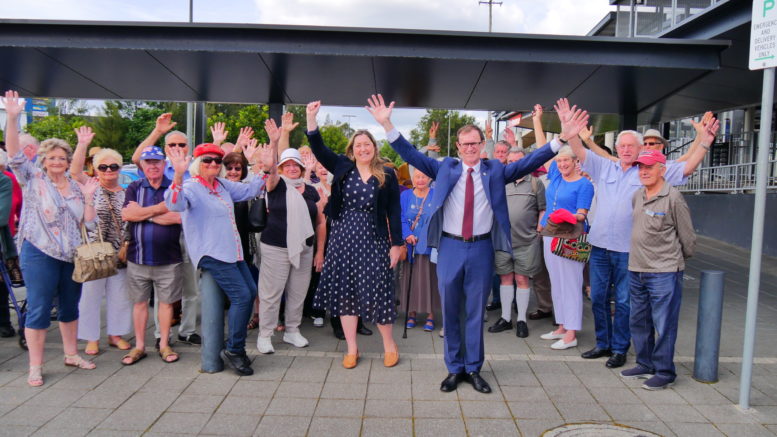 Work is finally underway on a $34M upgrade at Tuggerah railway station, following a seven-year community campaign for better accessibility.

Early work has started in preparation for major work, which is expected to begin in October this year.

The upgrade at Tuggerah, one of the Central Coast’s busiest stations, involves installation of new lifts and stairs, as well as a new pedestrian footbridge connecting the Pacific Highway, commuter car park and station platforms.

Other features will include a family accessible toilet and ambulant toilets; a widened platform with new, extended canopies; upgraded station entrances including landscaping, bicycle hoops and footpaths; improvements to CCTV, lighting and signage.

Planning is also underway to provide additional commuter car parking at Tuggerah which will include 15 accessible parking spaces, upgraded bus stops, and a dedicated pick-up and drop-off zone.

Minister for Regional Transport and Roads, Sam Farraway, said the upgrades would make it easier for everyone to access public transport services, including people with a disability, with mobility aids, parents or carers with prams, and travellers with luggage.

Parliamentary Secretary for Central Coast, Adam Crouch, said the upgrade would also provide a welcome boost to the local economy.

“This early work will support about 40 jobs over the next five months, with Downer EDI delivering the work on behalf of Transport for NSW,” he said.

Downer EDI will work on the detailed design of the station and earlier this month work began on service searches, survey, removal of vegetation, soil testing and geotech sampling.

“After our community was consulted about the project earlier this year, I know everyone will be excited to see work on the ground and the upgrade commencing at Tuggerah Station,” Crouch said.

The Entrance MP, David Mehan, said he was encouraged by the news that construction was finally starting.

“I welcome work finally starting on this important project and thank again my community who supported the campaign to build lifts at Tuggerah Station, a project the Perrottet State Government never wanted,” he said.

“I understand that construction will be a long process and may not be completed until 2024 and I look forward to being further briefed by Transport for NSW on this project,” Mehan said.

Work will be carried about between 7am and 6pm every day including public holidays.

Transport for NSW says all efforts will be made to minimise impacts on commuters where possible, although there might be occasional temporary traffic changes and closed parking spaces around the station.

The station upgrade is part of the NSW Government’s Transport Access Program which has committed almost $600M since 2011 to deliver modern, integrated and accessible transport facilities across regional NSW.