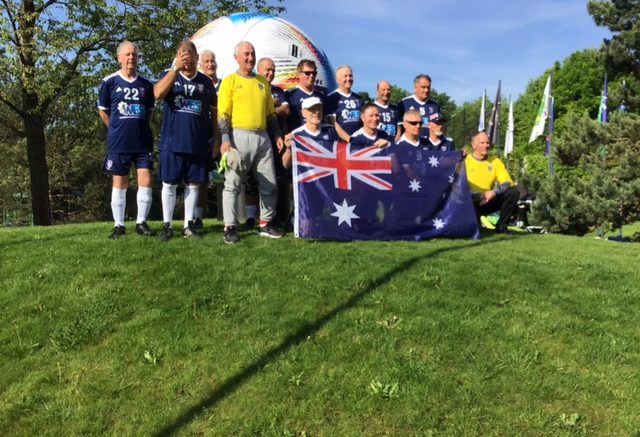 Members of the Australian Exiles

Noeline and Chris Cassettari, Steve James and Cliff Parker were invited to play with the Exiles, with most of the other players coming from Western Australia.

Parker said there were two competitions – for over-60s and over-65s.

“I finished as top scorer for the Exiles with seven goals.

“More importantly, it appears that Australia won the hearts of the many other countries who participated in the tournament.

“At the official pre-game debrief, the tournament organisers gave a special mention to the Australian Contingent for its 46 attendees, comprising players, managers, ‘medical’ staff and supporters.

“The Australian 65+ team were awarded the Tournament Fair Play Award, given to the team that represents and upholds the ethos of fair play and respect for all players and officials.

“This was a great award to win, because that’s what Walking Football is really all about.”

Parker said the group was looking for women aged over 40 and men aged over 50 who would like to play Walking Football.

“There must be plenty of ‘football tragics’ like us who still want to kick a football around,” he said.

He said all interested players were invited to turn up any Sunday at the Rose Football Academy, 22 Adelaide St. Tumbi Umbi, between 10.30am and 12.30pm.

“Walking Football is a great way for mature people to get out of the house, meet like-minded people and get some exercise,” Parker said.

“It’s probably good for our mental health too.”

Be the first to comment on "Walking footballers do Coast proud"