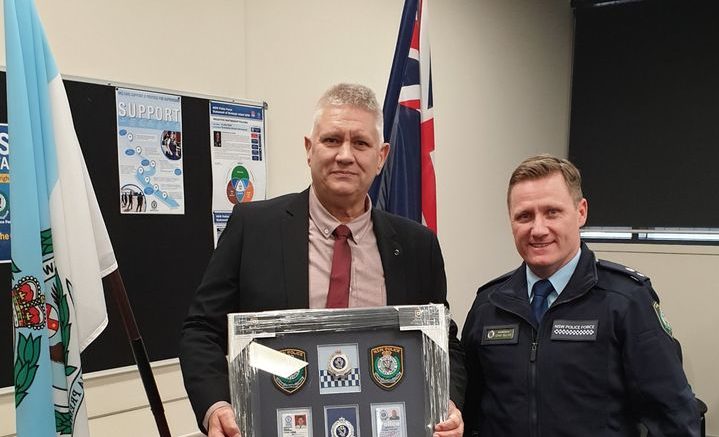 Two police sergeants, with a combined 69 years of service, were farewelled with honour from Wyong Police Station on Friday, June 3.

Family, colleagues and friends gathered to celebrate the retirement of the two sergeants at a morning tea, before police from Tuggerah Lakes District formed a guard of honour for the two policemen as they left the building to the sound of bagpipes.

Commander, Tuggerah Lakes Police District, Superintendent Chad Gillies said it was a privilege to be part of the celebrations of two wonderful police careers.

“As the Commander, I was honoured to be able to speak on behalf of the current and former colleagues of Steve and Graeme.

“It was so important that Steve and Graeme’s families; who have themselves been instrumental in these long police careers, were afforded the opportunity to see Steve and Graeme sent off in style.

“It was a great day and I wish them well for a long and healthy retirement.

“Thank you Sergeants Newman and Towner for your service, enjoy your well-earned retirement,” the Supt Gillies said.